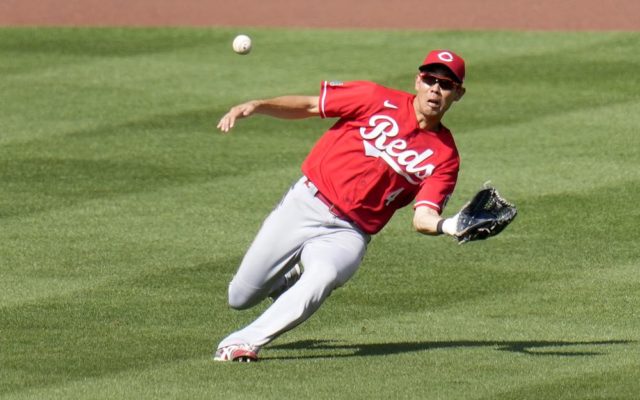 ST. LOUIS (AP) — Yadier Molina left the game in the fourth inning with a bruised knee, and the St. Louis Cardinals extended a losing streak to four for the first time this year with a 5-2 defeat to the Cincinnati Reds on Saturday.

“It’s just not going our way at the moment,” Cardinals manager Mike Shildt said. “It’ll turn. I appreciate the how guys are competing because sometimes you don’t get the end result, but it’s how you go about it. These guys are laying it all out there.”

The 38-year-old Molina, a nine-time All-Star catcher, and nine-time Gold Glove winner, took a foul tip off the bat of Kyle Farmer off his left knee in the fourth inning, Molina initially stayed in the game after he was examined by head athletic trainer Adam Olsen but appeared to be limping.

“It’s a bone contusion on his knee,” Shildt said. “It could have obviously been much worse, but initial findings are day to day.”

Andrew Knizner pinch hit in the bottom half for Molina, who is batting .277 with seven homers and 27 RBIs. Knizner made a run-scoring throwing error in the seventh.

Jonathan India and Eugenio Suárez homered for the Reds to back Tyler Mahle (5-2), who allowed two runs and five hits in seven innings with eight strikeouts. His innings matched his big league high.

“To be pretty blunt he put on a clinic as far as pitching is concerned,” Reds catcher Tucker Barnhart said. “He just had everything going. He was able to command the ball on both sides of the plate.”

Nolan Arenado singled off Lucas Sims leading off the ninth and Tyler O’Neill doubled with one out. Sims struck out Matt Carpenter and retired Edmundo Sosa on a flyout for his fifth save in six chances.

“It’s nice to get some good days back to back and in a row,” Reds manager David Bell said. “You definitely don’t set out to win a bunch in a row. You set out to win each and every day, and that’s what we’re doing right now.”

“He can’t make up for everything in one swing,” Bell said of Suárez who entered hitting .159. “When you keep battling and keep having good at bats and you’re able to contribute like that, it really keeps you going, and definitely that hit today was a big part of our win.”

Knizner threw wildly past third and into left field, allowing Jesse Winker to score. Winkler had been on second base when Genesis Cabrera sailed a wild pitch that went over Knizner’s glove and rebounded off the brick backstop to the catcher.

Cardinals starter Johan Oviedo allowed two runs and three hits in four innings. John Nogowski pinch hit for him with the bases loaded in the fourth and hit an inning-ending flyout.

Arenado had RBI singles in the first and fourth.

India homered in the third. The rookie is 13 for 27 with two homers six RBIs against the Cardinals.

Barnhart singled in a run in the fourth.

Reds: Placed INF Alex Blandino (broken right hand) on the 10-day injured list and recalled RHP Ashton Godeau from Triple-A Louisville. Blandino injured his hand when he was hit by a pitch from Jake Woodford in the fifth inning Friday night. Bell said Blandino should miss three to six weeks.

Cardinals: Placed LHP Kwang Hyun Kim (lower back tightness) and OF Justin Williams (neck stiffness) on the 10-day injured list and recalled 1B John Nogowski and RHP Angel Rondón from Triple-A Memphis. Kim departed his start Friday night after starting to warmup in the fourth inning. Williams’ neck flared up after the team returned from Los Angeles Thursday.

The Reds will start LHP Wade Miley (5-4, 3.26 ERA) against Cardinals RHP John Gant (4-3, 1.60 ERA) on Sunday in a rematch of their April 24 matchup in St. Louis. Gant earned the win in his only career start against Cincinnati, while Miley allowed two runs in six innings.