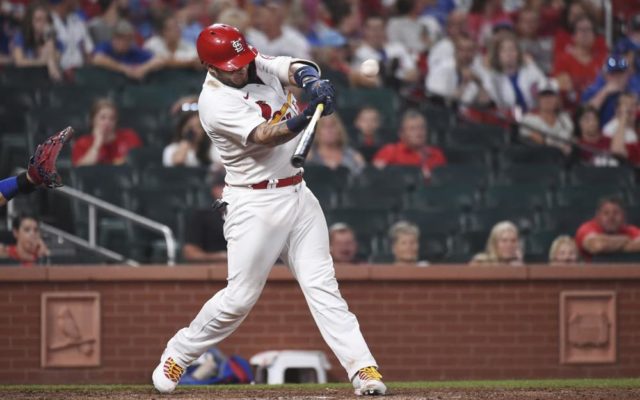 St. Louis Cardinals' Yadier Molina hits a single to drive in the winning run during the 10th inning of the team's baseball game against the Chicago Cubs on Wednesday, July 21, 2021, in St. Louis. (AP Photo/Joe Puetz)

ST. LOUIS (AP) — Cardinals manager Mike Shildt had one thought when he saw Yadier Molina striding to home plate in the 10th inning: Game over.

Molina doubled home the winning run against All-Star closer Craig Kimbrel to give St. Louis a 3-2 victory over the Chicago Cubs on Wednesday night.

“I think right there the game’s over,” Shildt said. “That’s the first thing that goes in my head. I’m sitting there and thinking it’s time to go home. He was locked in. He’s a tough player.”

Adam Wainwright pitched seven strong innings for the Cardinals. Harrison Bader and Dylan Carlson each hit an RBI double in the seventh to put St. Louis ahead 2-1.

“The defense behind me tonight was outstanding,” Wainwright said. “Those guys played a really good game. Their guy did a good job, too, so it was a good win. Last night was a tough loss. We just couldn’t lose this one. The clubhouse is rocking right now.”

Chicago tied it in the ninth on pinch-hitter Eric Sogard’s run-scoring double off Giovanny Gallegos.

Paul Goldschmidt started the bottom of the 10th as the automatic runner on second base. Nolan Arenado drew a walk from Kimbrel (1-3), who got the final out in the ninth for the Cubs. Molina then hit a drive to right field for a ground-rule double and his ninth career game-ending hit.

Anthony Rizzo began the top of the 10th on second and went to third on a single by Javier Baez that chased John Gant. But on a forceout at second, Rizzo stopped halfway down the line and was tagged out in a rundown for a double play.

“It looked like he just froze there,” Cubs manager David Ross said. “We left some guys on earlier in the game. We shouldn’t have even been in that situation, to be honest with you.”

“I was running through scenarios in my head before the play,” Sosa said through a translator. “What can I do if the ball gets hit to me? I saw that Rizzo wasn’t breaking immediately. I went over to second base by myself. I peeked again and saw he was a little bit further down the line and it was at the point of no return at that point. I had to go home so we could get Rizzo.”

T.J. McFarland (1-0) earned his first win with the Cardinals.

After the Cubs tied it in the ninth, Gant came in and hit two batters with pitches to load the bases before getting Rizzo to ground out.

St. Louis went ahead 2-1 in the seventh when the Cardinals chased starter Kyle Hendricks, who has won 10 straight decisions.

“Kyle was great tonight,” Ross said. “I thought it was another great performance from him. He’s been as good and as steady as anybody.”

Paul DeJong hit a slow roller in front of the plate and went to second on a throwing error by catcher Contreras. With one out, Bader hit a double to left that scored DeJong.

“I play with my heart,” Bader said. “It’s a matter of keeping things simple. I’m so happy to be out there playing baseball with my teammates. I think there’s a lot of good things ahead of us.”

Bader, who went 3 for 4, has hit safely in 12 of his last 14 games while notching five multi-hit efforts in his last seven games.

“He understands what kind of player he needs to be,” Shildt said. “He’s a talented kid.”

Andrew Chafin entered and got a flyout before Carlson doubled in Bader.

The Cubs took a 1-0 lead in the third when Rafael Ortega tripled home Nico Hoerner with one out.

“We left 12 guys on base,” Hoerner said. “In a low-scoring game, that’s significant. I had a couple of at-bats with runners in scoring position. Each guy in the locker room feels we were one pitch from turning the game around.”

Wainwright and Molina made their 292nd career start as batterymates, which is fourth all-time (since record-keeping began in 1908) in major league history. The pair is 14 games behind the Chicago White Sox duo of Red Faber and Ray Schalk for third place.

Shildt was ejected before the sixth inning began. Carlson was called out on strikes with runners on second and third by plate umpire Jeff Nelson to end the fifth. An upset Carlson voiced his displeasure with the call. Shildt came out and was sent to the clubhouse for the third time this season and the eighth time in his career.

“I took a nap,” Shildt quipped about how he spent the rest of the game.

Cardinals pitchers plunked five batters in the game, including three in the ninth inning. That raised St. Louis’ total to an MLB-leading 72 hit batters.

Goldschmidt extended his season-best hitting streak to 16 games with a double in the first inning. It’s the longest active streak in the majors and the longest by a Cardinals player since Molina’s 16-game run in April 2019.

Cubs: Kris Bryant (hamstring fatigue) remained out of the lineup. Bryant was removed in the fifth inning Wednesday after he made a diving catch in the third. He could potentially return Thursday. … 3B David Bote (left shoulder dislocation) will resume his rehab stint with Triple-A Iowa on Thursday after getting a day off Wednesday.

Cubs: RHP Adbert Alzolay (4-9, 4.59 ERA) will make his 17th start of the season Thursday and second against St. Louis. He is 0-2 with a 2.45 ERA in three career starts against the Cardinals.

Cardinals: LHP Kwang Hyun Kim (5-5, 2.87) has not allowed a run in 21 innings, the longest streak by a St. Louis pitcher this year. Kim, who has won four straight starts, went six innings to beat the Cubs 6-0 at Wrigley Field on July 10.