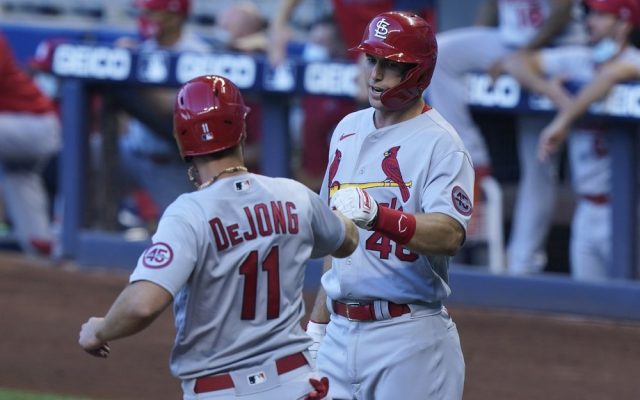 St. Louis Cardinals' Paul DeJong (11) and Paul Goldschmidt (46) celebrate after scoring in the first inning of a baseball game against the Miami Marlins, Monday, April 5, 2021, in Miami. (AP Photo/Marta Lavandier)

Molina drove in two runs with his 382nd double, moving past Hall of Famer Johnny Bench for eighth place on the career list among catchers.

“Not surprised, he’s earned every bit the right to be among the company of the greats,” St. Louis manager Mike Shildt said. “It means a lot to him. It’s well deserved.”

Ponce de Leon (1-0) allowed one run and three hits in five innings. The right-hander struck out three, walked one and hit Starling Marte twice. He relied on fastballs to shut down Marlins hitters as only 10 of his 93 pitches were off-speed.

“You love to go out there with all your weapons and fire exactly as you own them,” Shildt said. “But some days it doesn’t happen and the art of pitching is making adjustments and of course, Yadi is back there.”

St. Louis got a perfect sixth from Jordan Hicks and two scoreless innings from Giovanni Gallegos. Alex Reyes closed it with a scoreless ninth for his first save.

The performance by Cardinals pitchers helped overcome a difficult weekend in Cincinnati, where they allowed 27 runs in losing two of three games.

“I had a real tough time just trying to calm myself down,” Rogers said. “Probably the main thing was I was trying to strike them out on the first pitch, which isn’t possible.”

Tommy Edman led off the St. Louis fifth with a home run against John Curtiss.

The Marlins scored on Marte’s sacrifice fly in the fifth.

“We had the (roof) open tonight,” Miami manager Don Mattingly said. “You just don’t know what the wind does here honestly. We don’t play with it open that often. It’s nice when it’s open, but you don’t really know what it does. Not sure if it was knocking it down or not.”

De Leon and the three relievers induced 12 flyball outs and struck out six. Edman didn’t receive a chance at second base.

“Ponce is a flyball-strikeout pitcher,” Edman said. “We don’t get too many groundballs there. Obviously, you’ve got to stay ready.”