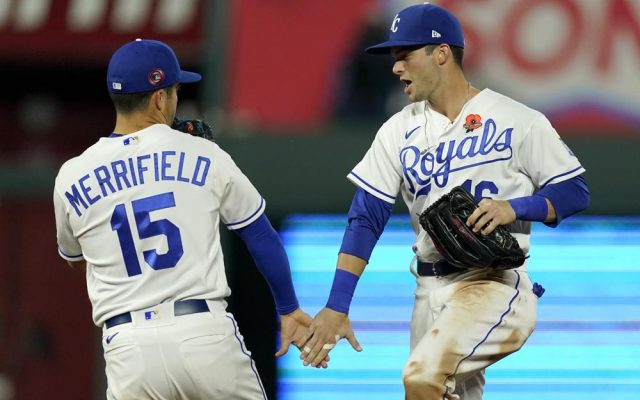 Mondesi tweaked his left hamstring when he charged a slow roller in the eighth. He was lifted for a pinch-hitter in the bottom of the inning.

“I hated to see him come out of the game right there,” Royals manager Mike Matheny said. “That was a really good play. There aren’t many shortstops in the league that can make that play. He had to take a full burst to make it happen.”

The Royals have won 10 of 16 to get back to .500 for the first time since an 11-game losing streak dropped them four games below.

Minor (4-2) allowed two runs and five hits. He struck out seven and walked one.

“A quality start and a win, so it was good,” Minor said. “I feel like I made some mistakes like every game. But I didn’t give up a whole lot of hard-hit balls.”

Chad Kuhl (0-2) took the loss in his return from the injured list. He gave up three runs and six hits in four innings.

“I thought the slider was good,” Pittsburgh manager Derek Shelton said. “He got stronger as the game went on. He was a little inconsistent with his fastball early on, but settled down and the pitch limit just got to him.”

Bryan Reynolds homered and drove in two runs for Pittsburgh.

The Pirates got a run in the first on an RBI groundout by Reynolds after Adam Frazier led off with a double.

Whit Merrifield opened the bottom half with a double and scored on a two-out single by Salvador Perez.

The Royals added two in the second. Edward Olivares was hit by a pitch and scored on Hunter Dozier’s double. Dozier then scored on a shift-beating single by Kelvin Gutierrez. Kansas City loaded the bases but couldn’t score any more.

“I feel good and the swing feels pretty good,” Dozier said of his recent production. “I feel like I’m in a really good spot right now.”

The Pirates got within one on a two-out single in the third by Jacob Stallings that scored Kevin Newman.

Mondesi hit a 417-foot drive beyond the bullpen in right field to give the Royals a 5-2 lead in the sixth. It was the second home run of the year for Mondesi, who was playing in his first home game this season.

“That ball was hammered,” Matheny said. “He wasn’t trying to do too much. He’s really been in a good place. That gave us a little bit of breathing room.”

Reynolds connected on a long home run to straightaway center field in the eighth.

The Royals got two runs in the bottom half. Gutierrez’s fielder’s choice drove in Nicky Lopez, and Michael A. Taylor’s double scored Gutierrez.

Pirates: 3B Ke’Bryan Hayes (left wrist strain) is on a rehab assignment with Triple-A Indianapolis. In seven games, he has gone 6 for 24 (.250) with two doubles, two homers and three RBIs. … LHP Austin Davis (left elbow sprain) has allowed two hits and one run while striking out 15 batters in a combined 7 1/3 innings of work in six rehab games between Class A Bradenton and Indianapolis. … INF Colin Moran (left groin strain) and OF Phillip Evans (left hamstring strain) are expected to begin rehab assignments with Indianapolis this week.

RHP Nick Mears was optioned to Indianapolis to make room for Kuhl, who had been sidelined with right shoulder discomfort since April 18. In two rehab starts at Triple-A, he gave up two hits and one run in 6 1/3 innings.

Pirates RHP Wil Crowe (0-3, 5.67 ERA) gets the ball for the finale of the two-game series. He lasted just 1 1/3 innings in his most recent start and has permitted seven earned runs in his last 6 1/3 innings.