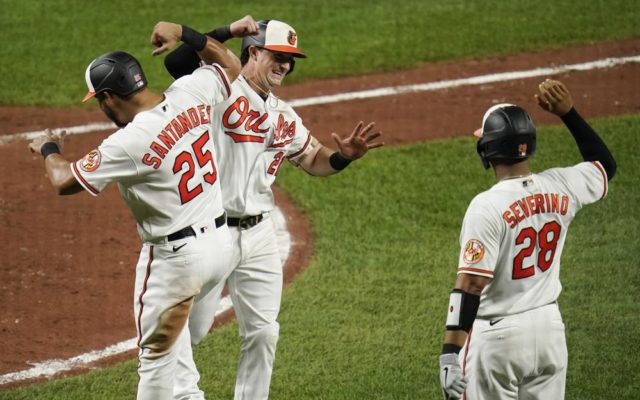 Baltimore Orioles' Austin Hays, center, is greeted near home plate after he drove in Anthony Santander (25) in on a two-run home run off Kansas City Royals starting pitcher Jackson Kowar during the third inning of a baseball game, Tuesday, Sept. 7, 2021, in Baltimore. Orioles' Pedro Severino (28) looks on. (AP Photo/Julio Cortez)

DJ Stewart and Austin Hays also connected for Baltimore, which evened the four-game series at one apiece.

“I did like how we swung the bat early,” Orioles manager Brandon Hyde said. “Nice job of scoring first and getting the lead for our young pitching staff.”

Orioles right-hander Mike Baumann, rated the team’s No. 10 prospect, was promoted from Triple-A Norfolk prior to the game and made his major league debut in the fifth inning. Baumann (1-0) retired 11 of the 14 batters he faced.

“I didn’t really know what the moment would be like,” Baumann said. “There was a lot of adrenaline, everything was just kind of a blur. Looking back on it, I don’t even know if I remember much of what happened on the mound. Just the feeling of walking off the field after, hearing the fans, that was a cool moment. It was definitely something to remember.”

Carlos Santana hit his 19th home run for the Royals, who are 9-4 in their last 13 road games after going 19-37 in their first 46. Kansas City left nine runners on base, its most since Aug. 27 at Seattle (also nine).

The Orioles took a 4-0 lead against rookie Jackson Kowar (0-3) on an RBI single by Anthony Santander, a fielder’s choice by Hays and a two-run homer by Stewart that was just out of the reach of center fielder Michael A. Taylor, who crashed into the wall.

“He did a good job of staying in the game by pitching a very uncharacteristic game for him,” Royals manager Mike Matheny said. “He used the slider more than he has ever used in his life. He couldn’t execute the fastball like he wanted to.”

A two-out bloop single by Nicky Lopez cut the lead to 4-1 in the third against Orioles rookie Alexander Wells, who made his fourth start of the season. Wells gave up two runs and five hits with two strikeouts and two walks over four innings.

Hays responded in the bottom half with a two-run shot that extended his hitting streak to a career-high 14 games. The Orioles did not manage another hit until Mullins led off the seventh with his 27th homer.

The Royals scored their third run on an error by third baseman Kelvin Gutierrez on a grounder by Taylor in the eighth.

Orioles: RHP Manny Barreda had his contract selected from Triple-A Norfolk. RHP Zack Burdi was optioned to the Tides.

Orioles: Jorge López’s sprained right ankle is a potentially season-ending injury, according to Hyde. López was injured attempting to cover first base during Monday’s game. … 1B/DH Trey Mancini missed his second straight game with general soreness. … SS Ramón Urías was also held out of the lineup with soreness in his upper right leg. … LHP Bruce Zimmermann (sprained right ankle) is scheduled to throw in the bullpen in the next couple of days.

Orioles: Matt Harvey (6-14, 6.28 ERA) will make his 28th start of the season. “We’ve gone start-to-start with Harvey here for the last four or five starts,” Hyde said. “Anything he’s given us this second half has been a bonus.”