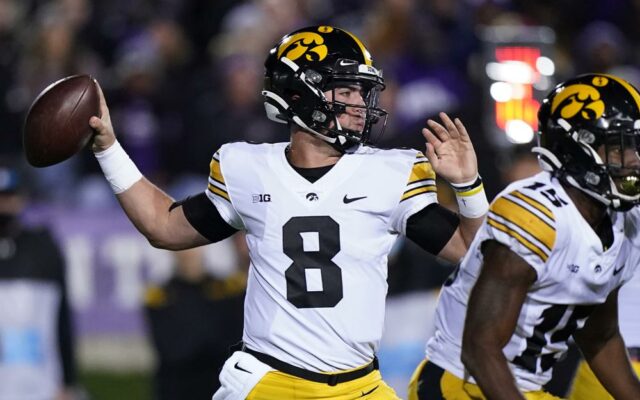 EVANSTON, Ill. (AP) — Alex Padilla could feel the jitters when he got the call to go into the game. Once he stepped on the field, he sure looked comfortable, though.

Padilla took over for the banged-up Spencer Petras and led three scoring drives, Tyler Goodson ran for 141 yards and a touchdown and No. 19 Iowa beat Northwestern 17-12 on Saturday night to stop a two-game losing streak.

The Hawkeyes (7-2, 4-2 Big Ten) got the bounce-back win they were seeking coming off lopsided losses to Purdue and Wisconsin that sent them tumbling 17 spots in the AP poll, though it wasn’t exactly a breeze.

Northwestern (3-6, 1-5) pulled to 17-12 with 2:21 remaining on Andrew Marty’s 31-yard touchdown pass to Evan Hull and quickly got the ball back after Iowa went three and out. But Dane Belton immediately sealed it with his second interception, sending the Wildcats to their third straight loss.

Padilla, a sophomore, led two touchdown drives in the first half in his first extensive look after Iowa went nowhere on its first three possessions. And the Hawkeyes won for the first time since beating Penn State on Oct. 9, after getting outscored 51-14 over the previous two games.

“It felt great,” Belton said. “That’s what you play for. You love the game and you love to celebrate victories. … That’s football. That’s college football. And for us to be able to do that as a team is the biggest thing overall.”

Padilla came in late in the first quarter and completed 18 of 28 passes for 172 yards. The sophomore helped get the offense going after Petras, limited by a shoulder injury he suffered at the end of last week’s game, went 2 of 4 for 4 yards.

“Spencer just couldn’t throw — not with zip on it,” coach Kirk Ferentz said.

Ferentz said he doesn’t think the injury is a major one. The question is who starts if Petras is completely healthy.

“I know Spencer’s led us to a lot of victories,” Ferentz said. “And tonight, Alex did. To me, that’s a good situation. I’m really proud of Alex for what he did. And we’re really proud of all the things Spencer’s done over the last two years as well.”

Goodson finished 12 yards shy of his career high after he was held to a combined 95 yards against Purdue and Wisconsin. He scored from the 13 late in the first quarter and broke off a 41-yard run early in the second to help set up a touchdown by Arland Bruce IV.

Jermari Harris had an interception in the end zone in the fourth quarter. And the Hawkeyes hung on to beat Northwestern after dropping four of the previous five meetings.

Marty started at quarterback for the Wildcats after replacing Ryan Hilinski in last week’s blowout by Minnesota and threw for 270 yards with a touchdown and three interceptions.

“I think there’s some really gutty and gutsy and tough plays that he made,” coach Pat Fitzgerald said. “When you play the quarterback position, you look back and want some plays back. But I thought he responded really well to adversity.”

Hull had 89 yards receiving and 41 rushing. The defense took a hit when defensive end Samdup Miller exited in the first half with a lower body injury, and the Wildcats remained winless since beating Rutgers on Oct. 16.

Play was stopped for a few minutes near the end of the first half when about eight or nine protestors carrying signs entered the field.

Iowa’s slide in the poll figures to stop after the Hawkeyes plummeted in recent weeks.

Iowa: Tops in the nation with 16 interceptions coming into the game, the Hawkeyes got back to taking the ball away. That’s something they did just once in the previous two games while committing seven turnovers.

Northwestern: The Wildcats continued to struggle after being outscored 74-21 over losses to Michigan and Minnesota.

Northwestern: At Wisconsin on Nov. 13.