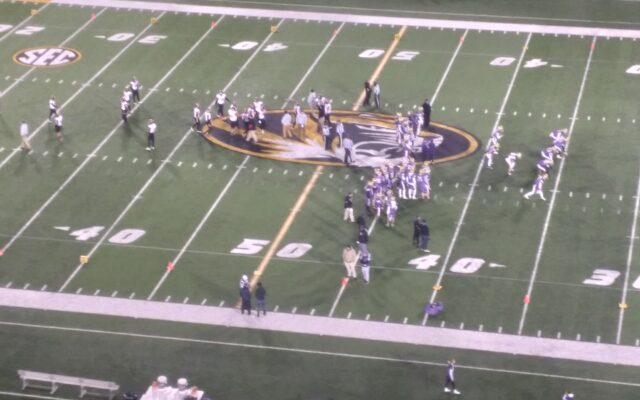 North Andrew defeated Bishop LeBlond at Faurot Field in Columbia 54-24 in the 8-man football championship game. North Andrew used a dominant rushing attack and consistent offense to score in every offensive possession that they had in the first half and led 38-24 at halftime after Braxon Linville scored on the final play of the second period. Linville rushed 26 times for 251 yards and four touchdowns in the game. The Cardinals leading rusher on the season, Hayden Ecker, ran another 32 times for 184 yards and three touchdowns.

North Andrews stopped a pretty potent LeBlond offense three times in the first half. While LeBlond did match North Andrew’s first touchdown and recovered an onside kick and threatened to score again, the Cardinals made a fourth down stop on that possession, scored, and forced another punt to regain control the game.

North Andrew scored on the first possession of the third period to create a 46-24 advantage. They shut out the Cardinals in the second half. North Andrew ran for 452 yards as a team. Bishop LeBlond had a 216 yard game from quarterback Landon Gardner, who threw 2 touchdowns.

North Andrew ends their season with a 14-0 record. North Andrew won their first MSHSAA football championship since 2016 with the victory.