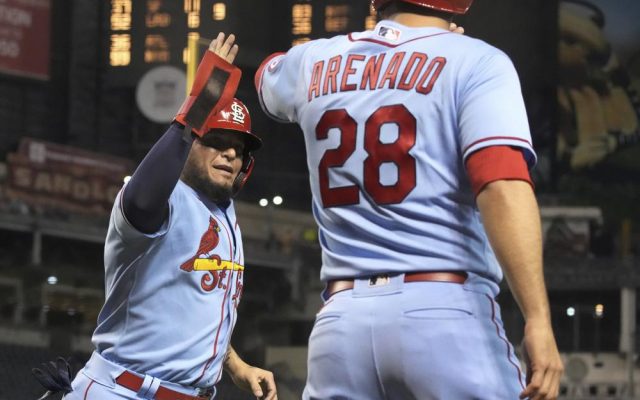 St. Louis Cardinals' Yadier Molina celebrates with Nolan Arenado (28) celebrate after they scored during the third inning of the team's baseball game against the Arizona Diamondbacks, Saturday, May 29, 2021, in Phoenix. (AP Photo/Rick Scuteri)

PHOENIX (AP) — Tyler O’Neill can do no wrong for the St. Louis Cardinals these days.

On the other side of the field, the Arizona Diamondbacks can’t seem to do anything right.

O’Neill homered for a third straight game, Yadier Molina had three RBIs and the Cardinals won 7-4 on Saturday night over the Diamondbacks, who have lost 13 games in a row.

The Diamondbacks are stuck in their longest losing streak since dropping a franchise-record 14 consecutive games in 2004. Arizona lost 111 games that season, and this year is quickly trending in a similar direction. The team’s 18-35 record is the worst in the National League.

O’Neill has been on a roll since Thursday, when he returned from a stint on the 10-day injured list due to a fracture in his left middle finger. The 25-year-old outfielder added two doubles and finished with three RBIs. He also made a diving catch in left that saved a run in the fourth inning, which impressed St. Louis starter Adam Wainwright.

“We’ve seen him do that a bunch,” Wainwright said. “You wouldn’t think a guy as muscle bound as him could do so many things athletically. You wouldn’t know he was such an incredible athlete.”

Said Cardinals manager Mike Shildt: “That’s the kind of player he is. He can beat you on both sides of the baseball.”

Trailing by three in the ninth, the Diamondbacks put their first two batters on base, bringing the tying run to the plate. Cardinals closer Alex Reyes retired Eduardo Escobar on a flyout and David Peralta and Christian Walker on strikeouts to earn his 15th save.

The Cardinals jumped out to a 1-0 lead in the first on Molina’s RBI single. They broke the game open in the third, scoring five runs on four hits, a walk and a hit by pitch.

St. Louis led 7-0 in the fifth but Arizona fought back. The Diamondbacks scored two runs in the fifth and two more in the sixth to make it 7-4. They could have had more in the sixth after loading the bases with one out, but Génesis Cabrera retired Domingo Leyba on a flyout and Josh Rojas on a grounder to end the threat.

“We couldn’t close up that gap,” Arizona manager Torey Lovullo said. “We had some opportunities.”

Wainwright (3-4) got off to a great start, retiring the first eight batters he faced. But the Diamondbacks started to hit the veteran right-hander hard in the fifth and sixth. Vogt connected on a two-run homer and Walker brought home two more runs with a single.

The 39-year-old Wainwright went 33 outs between giving up hits, from his one-hit outing against the Cubs earlier in the week through part of Saturday’s game versus the Diamondbacks. Molina was impressed when he heard that stat postgame.

Seth Frankoff (0-2) struggled most of the night and lasted just five innings. He gave up seven earned runs on seven hits, walked four and struck out five.

Cardinals left-hander Tyler Webb pitched a scoreless eighth inning, which was a nice change for him during a rough season. Webb’s been a mainstay in the St. Louis bullpen the past few years, but had an 11.57 ERA in 19 appearances before Saturday.

“It felt good to hold them right there,” he said. “Then Alex came in and shut the door.”

Diamondbacks: Walker (oblique strain) returned to the team after a rehab assignment at Triple-A Reno. He was in the starting lineup and batted fifth. The team optioned INF Andrew Young to Triple-A to make room for Walker. … Lovullo said INF Asdrubal Cabrera (hamstring strain) has started to take batting practice and was doing some light running. … RHP Zac Gallen (sprained right elbow) has been doing some throwing on flat ground.