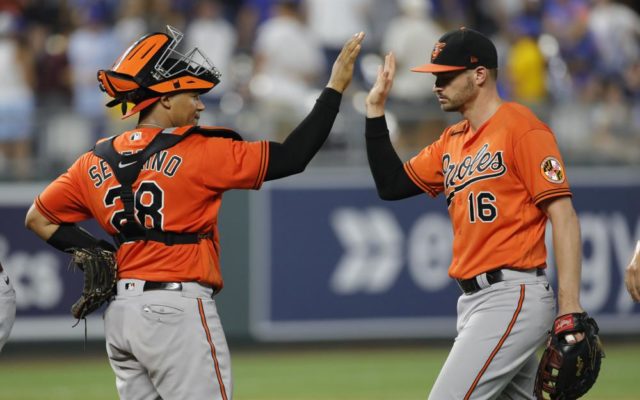 The Orioles got six consecutive hits in a five-run third inning as they chased starter Brady Singer and opened a 7-0 lead. It was only Baltimore’s second win in July.

“It’s nice to get those hits going together,” manager Brandon Hyde said. “That was our best game running the bases.”

Singer (3-7) gave up seven earned runs, the most in a start in his career. He lasted two-plus innings, allowing eight hits and one walk. His one strikeout matched his fewest in a start during his two seasons in the majors.

Kris Bubic pitched six innings in relief for the Royals, giving up just one run and two hits. He struck out five.

“He was terrific and everything we’d hoped for,” Kansas City manager Mike Matheny said. “That’s one for him to put in the memory bank of how he should be tagging the strike zone.”

“It’s been happening since the beginning, but at the end of the day I need to (get) three outs,” Lopez said. “I have to find a way moving forward to get past the fifth inning.”

Carlos Santana had an RBI double for Kansas City.

Seven of the nine starters for Baltimore had at least one hit. DJ Stewart, Anthony Santander, Domingo Leyba and Pedro Severino all had RBIs.

Lopez was pitching well into the fifth but was pulled after giving up three runs just one out from qualifying for the win. Whit Merrifield had a sacrifice fly and Salvador Perez hit an RBI single.