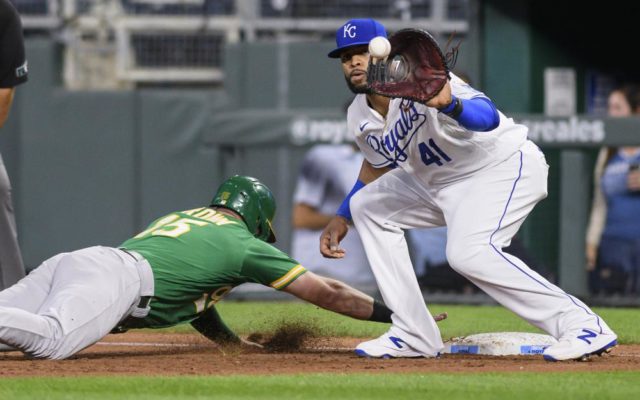 The Oakland Athletics' Seth Brown dives back ahead of the throw to Kansas City Royals first baseman Carlos Santana during the second inning of a baseball game, Tuesday, Sept. 14, 2021 in Kansas City, Mo. (AP Photo/Reed Hoffmann)

The Oakland A’s are having the kind of September they might want to forget real soon.

Perez hit a go-ahead, three-run homer in the sixth inning Tuesday night, giving him 43 on the season and the big league lead in RBIs, and the Kansas City bullpen bailed out starter Jackson Kowar as the Royals rallied from a six-run deficit for a 10-7 victory that knocked the sliding Athletics further out of playoff contention.

“I just try to think about how the team needs me in that situation, and not, ‘OK, Salvy, the team needs a homer,’ because that’s not going to work,” Perez said. “It’s a lot of hard work. I like to compete. Play the game hard until the last out.”

Kyle Isbel hit his first career homer and Hunter Dozier also went deep, but the star was the Royals’ good-natured, power-hitting catcher. Perez finished with four RBIs, most coming on his towering homer off Yusmeiro Petit (8-2) over the visiting bullpen in left field, to pull him within two home runs of Vladimir Guerrero Jr. for the major league lead.

“This guy lives for these moments,” Royals manager Mike Matheny said. “He just finds something in those spots every single time, to the point you’re shocked it doesn’t happen. This is a special season.”

Ervin Santana, Joel Payamps, Jake Brentz (5-2), Domingo Tapia, Josh Staumont and Scott Barlow surrendered just one run over the final eight innings. Barlow walked the first two in the ninth before finishing for his 13th save.

“It was a special night for our ’pen,” Matheny said.

“We’re still grinding,” said Oakland manager Bob Melvin, whose club began the day 2 1/2 games back of the second AL wild-card spot. “We know where we’re at. We’ve had some tough games along the way in the last couple weeks. It looked like we were on our way out of it and we got bit. We have to win games.”

The A’s have struggled on the mound during their September swoon, and Kowar did just about all he could to stake them to a lead too big to blow. His pitching line: five runs on three hits, four walks and a wild pitch while retiring three batters.

The A’s still managed to give the lead away.

Frankie Montas, who’d been 3-0 with a 1.30 ERA in his last four starts, promptly coughed up three runs on a string of hits in the third inning. Then in the fourth, Dozier took the Oakland starter deep to pull the Royals within 6-4.

“I was not locating my pitches really well since the game started,” Montas said, “and those are the days I have trouble.”

The A’s got a run back in the fifth, but the Royals kept coming. Isbel’s one-out single off Petit began the go-ahead rally, Whit Merrifield added his third base hit, Nicky Lopez got on board with an RBI single and Perez cleared the bags and gave Kansas City the lead with his three-run shot into the cool night sky.

Isbel’s two-run homer off Sergio Romo in the seventh provided the Royals all the cushion they needed.

The Royals promoted GM Dayton Moore to president of baseball operations and elevated longtime assistant J.J. Picollo to fill his previous role Tuesday. Moore has been general manager since 2006, the year Picollo arrived in Kansas City.

“We’re going to be more strategic in different areas at different times that requires more attention,” Moore said, “and we have the manpower to do that but, ultimately, it’s my responsibility to have the right people in the right places.”

Royals owner John Sherman announced Tuesday the club was discussing future stadium options that could include a new downtown ballpark. The club’s lease on 53-year-old Kauffman Stadium expires in 2031.

“I wouldn’t say there’s a drop-dead date (for a decision),” said Sherman, who purchased the Royals two years ago. “It would depend on how the process goes forward and what type of feedback we get from the community.”

Royals: Payamps was reinstated from the injured list in place of RHP Scott Blewett, who was optioned to Triple-A Omaha.