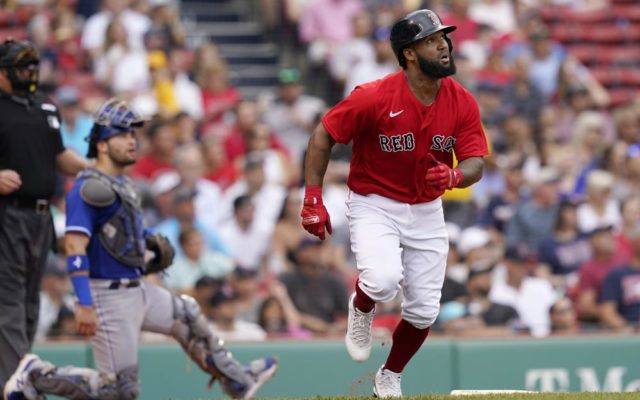 Danny Santana and Rafael Devers each homered and drove in five runs. J.D. Martinez also homered, starting Boston’s five-run fourth with his 17th of the season. Santana connected for a three-run shot later in the inning. Devers hit his 20th of the year, a three-run blast in the sixth.

The Red Sox scored their most runs in a game this season and matched their season best with 17 hits. Four of them were homers, making it the third time in five games they have hit four out of Fenway Park.

Boston won its seventh in a row and completed a four-game sweep of the Royals, who lost their ninth straight.

Eovaldi (9-4) allowed a pair of singles in the first and mostly cruised after that, scattering three more hits. He didn’t walk a batter and struck out six. Matt Andriese pitched the final two innings, allowing one unearned run in the ninth.

Hernández drove the fourth pitch he saw from Kris Bubic (2-4) into the seats above the Green Monster, his ninth homer of the season. He also led off with a home run against Kansas City on Monday and in Sunday’s win over the Yankees.

The Red Sox followed with four runs in the fourth, four more in the fifth and three in the sixth.

The Royals started their 10-game trip by beating the Yankees on June 22 but haven’t won since. Jarrod Dyson doubled home Ryan O’Hearn in the ninth for Kansas City’s only run.

“You fight your way through this. No one’s going to throw out a hand or a life preserver,” Kansas City manager Mike Matheny said. “We’ve got to dig deep and realize that what we’re feeling right now is not what we want to feel.”

“Any time we score runs, I want to try and get those guys back in the dugout as fast possible. I was able to do that today and I think that’s why our offense was able to keep putting the pressure on their guys,” Eovaldi said.

Bubic pitched four innings, allowing five runs on four hits and three walks. Ervin Santana took over in the fifth and allowed four more runs, including one when we was called for a balk with the bases loaded.

All three of the homers Bubic allowed came on changeups.

“If you’re going to go to a pitch that you know they’re sitting on, you’re going to have to be able to stretch the zone with it. Those are things that Kris is learning the hard way with a couple of these starts,” Matheny said.

Royals: INF Nicky Lopez, who fouled a ball off his foot Tuesday, was back in the lineup, starting at shortstop and batting ninth. He went 2-for-3.

Red Sox: 1B Bobby Dalbec missed a second straight game after leaving Tuesday night with tightness in his right hamstring.