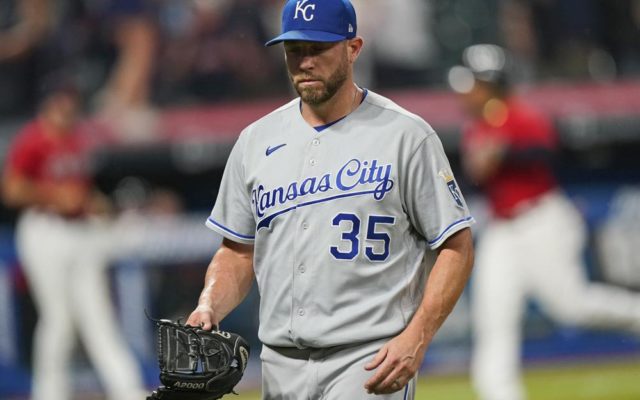 CLEVELAND (AP) — As Franmil Reyes stood waiting in the on-deck circle, he silently begged for a chance to end Cleveland’s losing streak.

He got his wish.

Reyes hit a three-run homer with two outs in the ninth inning as the Indians stopped a nine-game losing streak — their longest under manager Terry Francona — with a 7-4 win over the Kansas City Royals on Thursday night.

“I went there almost like hoping they’d walk José,” Reyes said. “I was like, ‘Please, walk him. Give me this shot. I want it.’ And I get a pitch. There it is.”

Reyes’ 14th homer set off a wild celebration by the Indians, who doused the slugger with water when he reached home plate. The win eases some recent pain for the Indians, who had been collapsing amid a slew of injuries and little offense.

Before Reyes’ blow, Roberto Pérez came through in the clutch with a three-run homer in the eighth to give the Indians a 4-3 lead and new life.

Carlos Santana homered twice for the Royals, with his second shot tying it 4-4 in the ninth off James Karinchak (5-2), who wound up getting the win after blowing a save.

Bobby Bradley also homered for the Indians, who won for the first time since June 28. For a while, it looked as if Cleveland might extend its longest losing streak since an 11-gamer in 2012.

“I actually didn’t care how he won. Just the fact, we needed to win a game,” said Francona, who has spent the entire season working around key injuries, including the loss of his top three starters. “And it was a hard one to win. But we won it.”

With the Indians badly in need of a big hit, Pérez gave them one, connecting off Scott Barlow to give Cleveland a 4-3 lead. After circling the bases, Pérez was met before he reached the dugout by several teammates.

But the euphoria didn’t last long as Santana, who played 10 seasons in Cleveland before signing with Kansas City as a free agent last winter, connected for his second homer.

Hunter Dozier also homered for the Royals, who have been on their own skid and have lost 13 of 16.

Santana and Dozier connected for solo homers in the fourth off Zach Plesac, who returned from the injured list to Cleveland’s rotation after bizarrely breaking his right thumb and missing nearly six weeks.

Plesac wasn’t bad, allowing three runs — two on homers — and five hits in four innings while on a pitch count in his first start since May 23.

“It was nice having him back,” Francona said.

The Indians were no-hit by five Tampa pitchers over seven innings Wednesday in Game 2 while being swept in a doubleheader. They finally got their first hit in 11 innings over three games when Óscar Mercado led off the third with a double off Danny Duffy that was initially ruled foul but changed after a video review.

Cleveland has been on the wrong side of two other no-hitters this season.

The left-hander was in line for his first win since May 1 before the Indians rallied against Kansas City’s normally reliable bullpen.

But Duffy was pleased with his outing (one run in five innings) and feels stronger after missing time with a forearm strain.

“It just didn’t fall our way tonight,” he said. “But I’ll put our guys about against anybody. We all have confidence in each other and we’re going to come out of this little funk.”

As the Indians continue to make pitching plans on the fly due to injuries, RHP Triston McKenzie will be recalled from Triple-A Columbus to start Friday’s game against Royals RHP Brad Keller.