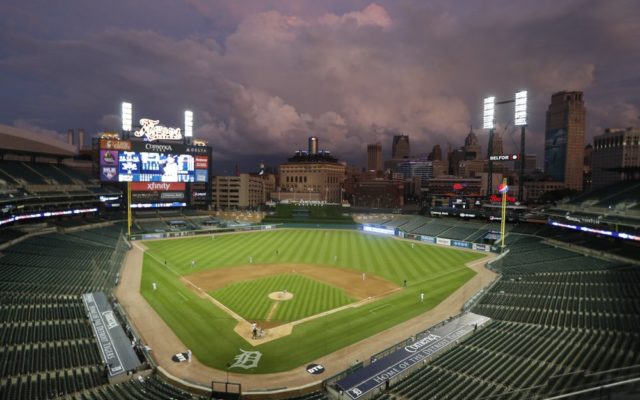 The sun sets as the Detroit Tigers and the Kansas City Royals play a baseball game Monday, July 27, 2020, in Detroit. (AP Photo/Carlos Osorio)

Moore, who has been general manager since 2006, will continue to have final say on trades and other roster moves, but Picollo will have a greater voice in the room when it comes to putting together the team.

“I’m not a micromanager. We’re going to allow people to do their jobs,” Moore said. “It’s very collaborative, as it always has been, and I think the uniqueness of this relationship is we’ve all worked together for so long.”

Indeed, the 54-year-old Moore and the 51-year-old Picollo have worked together for 15 years in Kansas City. Before that, the pair spent time in the Atlanta Braves organization during their heyday in the 1990s.

“I would be foolish as a first-time general manager not to lean on someone who has sat in that seat,” Picollo said. “We’re fortunate how we’re set up in the front office. That collaboration has always taken place.”

Moore presided over one of the most remarkable turnarounds in baseball history, leading the long-suffering Royals from a team that regularly lost 100 games upon his 2006 arrival to one that reached consecutive World Series. And in 2015, they beat the New York Mets in five games for their first championship in 30 years.

The Royals have been on another major rebuilding effort after the small-market club was unable to keep some of the big names that ushered in their winning era. But there have been signs that another breakthrough is on the horizon as a wave of talented young pitchers continues to help Kansas City win games down the stretch this season.

Picollo, who has interviewed for several GM jobs, has long been considered Moore’s heir apparent.

“He’s totally prepared. He talks about elevating his role and being more effective and I can’t wait to see that” Royals owner John Sherman said. “J.J. has been an architect of what I would call helping to modernize our baseball operations department over the past few years. He had a lot of help in doing it but when you talk about data science and data capture and all the tools we have for player development, J.J. helped to lead us to that evolution.”

The organizational structure is similar to those embraced by about half of big league teams, and has become necessary in part due to the changing business of baseball. The Royals had just 85 employees when Moore arrived, but they now have 266 on the payroll, including such new departments as performance science and behavior science.

The change should allow Moore to better handle the growing complexity of the organization.

“This structure is best practice in our industry now,” Sherman said. “I really expect to get more executive, high-level thinking out of Dayton when we think about the team, and I know the operation of the ballclub is in good hands.”

Moore, who grew up a Royals fan in Wichita, began his career as a scout with the Braves. He climbed the ranks to director of international scouting and director of player personnel development, and in 2005 he was given the job of assistant general manager.

Then-Royals owner David Glass, who had been pilloried by fans for his inability to turn the Royals around, turned to Moore in June 2006 to finally accomplish the task. Moore decided to invest heavily in Latin America, establishing academies that helped to identify talent, and slowly built the Kansas City farm system into one of the best in the big leagues.

Still, it took until 2013 before Moore saw the fruits of that labor in Kauffman Stadium. That’s when players such as Eric Hosmer and Mike Moustakas began to get their call-ups, and combined with some nervy moves made by Moore — such as trading away Zack Greinke and acquiring James Shields and Wade Davis — finally put the Royals over the top.

They reached the World Series the following year, losing to the Giants in a dramatic series that came down to the final out of Game 7 in Kansas City. And they returned the following year to finish the job, beating the Mets for the championship.

Picollo had his fingerprints on those teams, too.

The former Braves scout joined the Royals as director of player development in 2006 and, two years later, became the assistant GM in charge of scouting and player development. In that role, Picollo worked closely with the Royals’ entire minor league setup, ushering players from their first steps in pro ball all the way to the majors.

He was promoted to his current role as vice president and assistant GM in charge of player personnel in 2015, and now he will have an opportunity to finish Moore’s latest rebuilding job in Kansas City.

“This structure has been presented a few different times and truthfully, it just wasn’t one that I was personally ready to embrace for a number of reasons,” Moore said. “I began to evaluate our personnel and the different skillsets that are in this front office. We had discussions and laid out the different roles and how we can achieve sustained success as John desires, our fanbase desires and we aspire to, it became very, very clear this was the structure that made the most sense.”