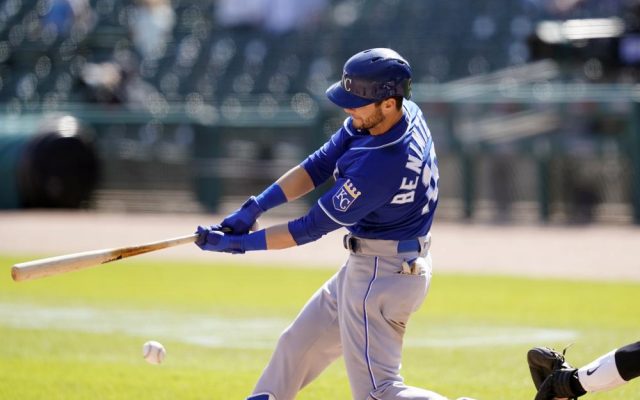 Kansas City Royals' Andrew Benintendi strikes out swinging to end the ninth inning of a baseball game against the Detroit Tigers, Thursday, May 13, 2021, in Detroit. (AP Photo/Carlos Osorio)

As the Major League Baseball world nears the trade deadline the Kansas City Royals and New York Yankees Wednesday pulled off a deal that will send outfielder Andrew Benintendi to the Yankees for three Minor Leaguers.

The 28-year-old has postseason experience, plays Gold Glove-caliber defense in left field and will give the Yankees a left-handed on-base machine to complement their power-packed lineup.

The Royals get three pitching prospects in exchange for Benintendi- lefty T.J. Sikkema — rated the Yankees’ No. 19 prospect and a former Missouri pitcher — right-hander Beck Way (No. 21) and right-hander Chandler Champlain.

The 24-year-old Sikkema was the Yankees’ 38th overall pick in the 2019 Draft. He owns a 2.48 ERA across 36 1/3 innings and 11 appearances (10 starts) with 54 strikeouts and nine walks with High-A Hudson Valley this season. He missed all of the 2021 season with shoulder and lat issues that didn’t require surgery.

Way and Sikkema will be assigned to High-A Quad Cities, and Champlain will join Single-A Columbia.