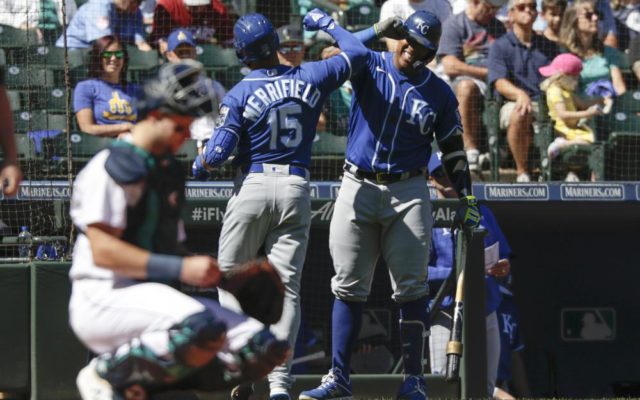 SEATTLE (AP) — Salvador Perez is grinding down the Seattle Mariners’ postseason hopes, one big swing at a time.

Perez homered for the fourth straight game, lining a two-run shot off the top of the fence for his 37th of the season to lead the Kansas City Royals over the Mariners 4-2 on Saturday.

Perez’s four-game home run streak is tied for the longest of his career, the last coming in 2017. He has 16 homers since the All-Star break, including seven on the Royals’ current 10-game trip.

“The way I do it is I prepare myself every day to play and compete and try to win the game,” Perez said.

Whit Merrifield also homered for Kansas City, which won its third straight over Seattle to damage the Mariners’ postseason aspirations.

Merrifield hit the 11th leadoff home run of his career on the second pitch of the game from starter Tyler Anderson (6-9). Perez, who hit grand slams in each of the first two games of the series, homered with two outs in the fifth, a drive that barely eluded the leap of Dylan Moore at the wall in left field.

Perez popped out in the third inning with the bases loaded but got the better of Anderson two innings later.

Cam Gallagher added a two-out RBI single in the ninth after Emmanuel Rivera doubled on a popup that fell in the outfield between Jarred Kelenic and Mitch Haniger.

Seattle picked an inopportune time for a three-game skid, especially after a successful 6-2 road trip that kept the Mariners in contention in the AL wild-card race. They fell 5 1/2 games behind Boston for the final spot.

“It’s been a rough series against the Royals. The games have been very close, very competitive. They have gotten the big hits and we haven’t,” Seattle manager Scott Servais said.

The Mariners’ first run came on Cal Raleigh’s bases-loaded walk in the fifth inning, the only run charged to starter Daniel Lynch. Lynch missed out on getting the win by lasting just 4 2/3 innings, but the Royals’ bullpen was solid.

Domingo Tapia, Joel Payamps (1-3) and Scott Barlow combined for 4 1/3 innings, allowing four hits and a run. Barlow ran into trouble in the ninth on consecutive two-out doubles by Haniger and Luis Torrens, but got Kyle Seager to ground out to finish his 10th save.

Royals relievers have allowed three earned runs in 16 2/3 innings in the first three games of the series.

Other than the two homers, Anderson was terrific. The lefty pitched into the eighth for the second time this season but was pulled after Nicky Lopez led off the inning with a single. Anderson allowed eight hits and had six strikeouts.

Anderson has gone 26 straight starts of at least five innings pitched, 24 of them this season.

“A couple pitches that I obviously would like back that probably weren’t that bad of pitches, but they were too good at pitches to those guys right now, who are really swinging the bat hot,” Anderson said.

Seattle made a flurry of roster moves prior to Saturday’s game, including outfielder Jake Fraley going on the 10-day injured list with right shoulder injury. Fraley appeared to be hurt crashing into the wall trying to rob a home run in the 12th inning of Friday’s loss.

Seattle recalled RHP Wyatt Mills and selected RHP Jimmy Yacabonis from Triple-A Tacoma. IF Shed Long Jr. was transferred to the 60-day injured list to clear a 40-man roster spot. RHP Keynan Middleton was also outrighted to Tacoma after being designated for assignment earlier this week.

Royals: 1B Carlos Santana was a late scratch due to hip soreness.

Mariners: Seager was out of the starting lineup due to a sore back that developed during Friday’s loss but came on as a pinch-hitter in the seventh inning and has appeared in 128 of 130 games this season.

Royals: RHP Brady Singer (3-9, 5.07) will make his first ever start against the Mariners. Singer took the loss in his last outing allowing four runs in five innings against Houston.