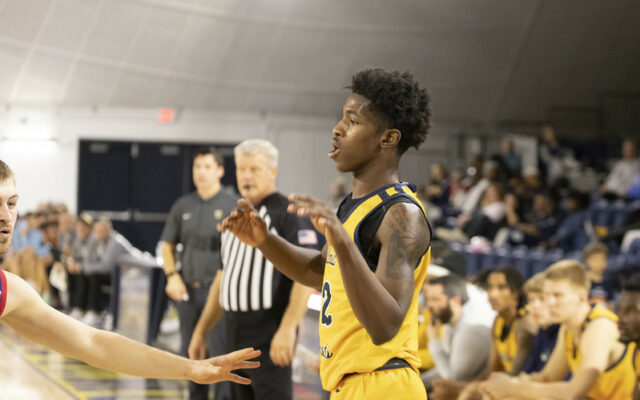 All five starters scored in double figures for the Graceland men’s basketball team, and Graceland defeated the Missouri Valley Vikings 79-66 at the Morden Center in Lamoni on Saturday afternoon. In the first half, Graceland built a 9-point lead late in the first half, but Missouri Valley actually led at halftime 30-29. The Graceland opened the second half with a 14-6 run over the first 5 minutes and sustained that margin over the next 10 minutes. Graceland would get the lead to as many as 16 points in the second half. Missouri Valley did close to within 13 for the final margin. Graceland shot 57% from the field in the game. They did not have a lot of three-point shooting, but Seth Compass did hit four of five three-point shots in route to his third straight game scoring over 20 points. While Compass had the scoring lead with 22, Sam’i Roe scored 15 points Aleksa Markovic had 12 points, and CJ Wilson and Trent Daughtry both scored 11 points for Graceland. Graceland is now 3-6 in the Heart of America Conference. They are 8-7 overall. Graceland will be at Cedar Rapids on Wednesday to face Mount Mercy.

The Graceland women’s Basketball team could not shake off a tough shooting afternoon at home Saturday afternoon, and the Missouri Valley women defeated Graceland 79-39 at the Morden Center in Lamoni. Neither team got off to a great offensive start in the game. Missouri Valley led just 4-1 after the first 5:30, but Missouri Valley led 17-6 at the end of the first quarter. They extended the lead to 40-14 at halftime, and never looked back. Missouri Valley had four players score in double figures. Graceland had 20 of their 39 points come from the bench. Analeza Edore scored 10 points to pace Graceland. Vegas Camacho had another 8 for Graceland. The Graceland women are now 3-6 in the heart of America conference. They are 8-7 overall. Graceland will face the Mount Mercy women on Wednesday evening in Cedar Rapids.