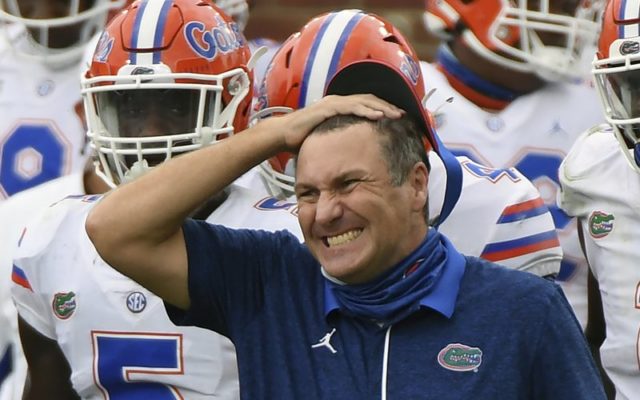 Florida head coach Dan Mullen reacts during the second half of an NCAA college football game against Mississippi in Oxford, Miss., Saturday, Sept. 26, 2020. Mullen was given several more chances Monday, Oct. 12, 2020, to walk back bizarre comments about wanting to pack 90,000 screaming fans inside Florida Field during the coronavirus pandemic. He declined each of them, brushing aside criticism and insisting he's focused on defending national champion LSU. (AP Photo/Thomas Graning)

GAINESVILLE, Fla. (AP) — The Southeastern Conference postponed next week’s game between Missouri and No. 10 Florida on Friday, the third league contest moved this week because of COVID-19 outbreaks.

The Gators had at least 21 players and coaches test positive for the coronavirus and dozens more quarantined because of contract tracing. That left them with fewer than the conference-mandated 53 scholarship players available Saturday against defending national champion LSU.

Because of the SEC’s safety protocols, Florida likely would not have gotten everyone back in time to practice and prepare for Mizzou. So the Gators will get consecutive weeks off before hosting Missouri on Oct. 31. That had initially been an off week for coach Dan Mullen’s team.

Florida and LSU are tentatively scheduled to play Dec. 12. Missouri and Vanderbilt are slated for the same day after their game this week got postponed because of an outbreak within Vandy’s program.

Trunk or Treat at The Old School

Paranormal Haunting at The Old School