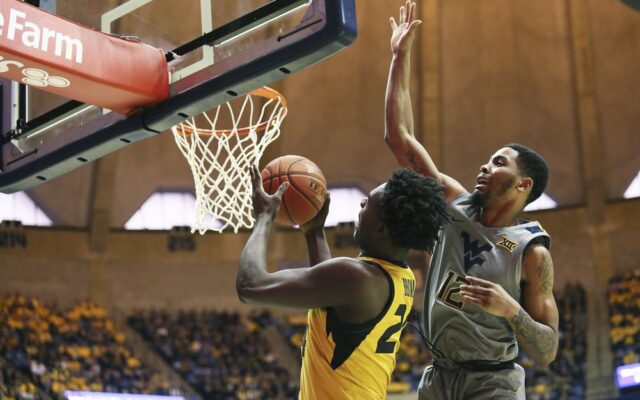 Missouri forward Kobe Brown (24) goes to make a shot as he is defended by West Virginia guard Taz Sherman (12) during the first half of an NCAA college basketball game Saturday, Jan. 25, 2020, in Morgantown, W.Va. (AP Photo/Kathleen Batten)

College conferences are re-evaluating their policies as numerous basketball games have been postponed or cancelled around the country.

On Thursday, the SEC released its revised policies on interrupted games.  The guidelines set forth the number of healthy players and coaches required in order for a game to take place.  The guidelines read:

“An SEC men’s or women’s basketball team will be required to play if it has at least seven (7) scholarship student-athletes and one (1) countable coaching staff member available to participate. The impacted institution has the option to play the game with fewer than the seven players and/or one countable coach, if it elects to do so. Otherwise, upon approval by the Commissioner, the game will be rescheduled or declared a no contest.

In addition, if the institution believes there are other compelling circumstances that warrant delay, the institution may request postponement of the contest. The institution shall be required to present the reasons it believes the game should be postponed, including all relevant data (specifying the total number of players not available to participate due to isolation, quarantine and injury) to the Conference office as soon as practicable in advance of the contest. The final determination to postpone a contest shall be made by the Commissioner, or his/her designee.

If a contest is postponed, efforts will be made to reschedule the game. If a contest cannot be rescheduled, the Commissioner shall cancel the contest and it will be recorded as a no contest.”

The SEC is scheduled to begin conference play on December 29th at Kentucky.