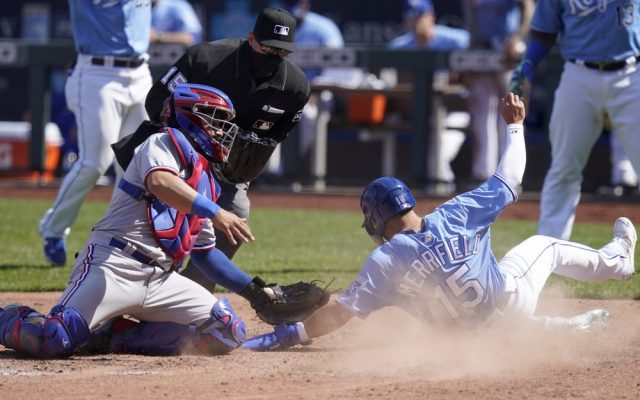 Released by Washington after hitting .196 last season, Taylor is off to a sensational start for Kansas City. After getting three hits and throwing out two runners at the plate from center field in a 14-10 win on opening day, Taylor came back with a home run and double as the Royals improved to 2-0.

“I’ve been kind of a slow starter in April,” Taylor said. “It kind of feels good to go the other way. I’ll take it.

“I feel really good about my routine right now. I try to game plan the best I can, then just go out there and compete.”

Whit Merrifield also homered for the second game in a row.

Once again, the Royals spotted the Rangers a big early lead before rallying. Kansas City allowed five runs in the top of the first inning in the opener, and this time trailed 4-0 before scoring three runs in the fifth and seven more in the sixth.

“It is frustrating,” Texas manager Chris Woodward said. “These guys have put in a lot of work, especially on the pitching side. It’s something we’re going to have to get through.

“Those innings are critical. We have a bridge inning in the sixth. The starter gave us a chance to win a game and what happened today can’t happen.”

“I could have been better, but I made a lot of good pitches,” Minor said. “Once you count the (David) Dahl base hit and the (Joey) Gallo homer, I had a bad inning. I got behind in some counts. But overall I threw some really good pitches.”

“I thought he did great for the first time ever in the major leagues,” Woodward said. “It looked like he was completely under control.”

Gallo’s mammoth 450-foot homer to center put the Rangers on the board in the first. After Dahl doubled, Gallo hit a 1-2 pitch into the batter’s eye.

Minor ran into trouble in the third, much of it his own doing. After retiring the first two hitters, he gave up an infield single before a four-pitch walk and a hit batter. Nate Lowe then looped a two-run single.

The Royals finally got to Arihara when Taylor hit a 458-foot home run to straightaway center in the fifth.

“Michael, that was quite a spark,” manager Mike Matheny said. “You don’t see many balls go up there. That was impressive. We’ve seen flashes. We knew he would be a good fit in center field. We’ve seen some things in his at-bats over the years, but he hasn’t even seen the best of his offense yet.”

Kyle Isbel then tripled when center fielder Leody Taveras lost his fly ball in the sun. Hanser Alberto doubled and when Nicky Lopez bunted for a single, the Royals had a cycle in the first four batters of the inning. Merrifield drove in Alberto with a fielder’s choice.

Taylor’s two-run double in the sixth lifted Kansas City to a 5-4 lead. Isbel followed with an RBI single, Merrifield drove in two with a single, and Carlos Santana had a two-run double.

Merrifield homered in the eighth.

Royals: 3B Hunter Dozier was out of the lineup with swelling in his right thumb. He left Thursday’s game with a contusion apparently hurt on a swing. Matheny said Dozier is day to day.

The Rangers will send right-hander Jordan Lyles to the mound Sunday. He went 1-6 with a 7.02 ERA last year.

Royals right-hander Brady Singer is looking to build on an impressive debut season. He went 4-5 with a 4.05 ERA in 2020, but he won three of his last four starts.