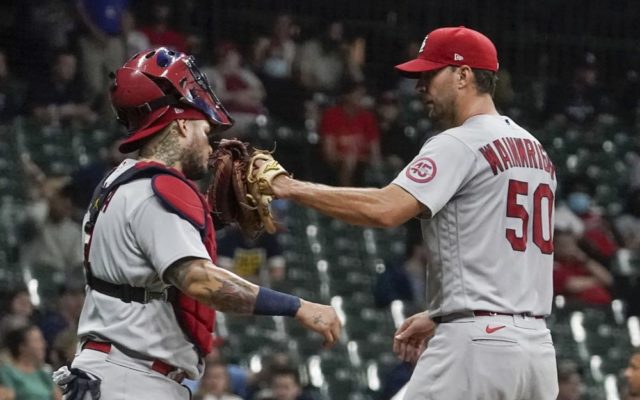 St. Louis Cardinals starting pitcher Adam Wainwright is congratulated by catcher Yadier Molina as he leaves the game during the seventh inning of a baseball game against the Milwaukee Brewers Friday, Sept. 3, 2021, in Milwaukee. The game marks the 300th game that Wainwright and Molina played in together. (AP Photo/Morry Gash)

MILWAUKEE (AP) — Adam Wainwright and Yadier Molina appreciated the magnitude of the career milestone they reached Friday night. They were more concerned about boosting the St. Louis Cardinals’ playoff hopes.

The longtime teammates formed St. Louis’ starting battery for a 300th time and played key roles in the Cardinals’ 15-4 blowout of the NL Central-leading Milwaukee Brewers.

“Just a great moment, just a great day for me and Waino,” Molina said. “We focused on winning the game. Obviously we know what this day meant for us … but we were focused on the game, trying to win the game.”

Nolan Arenado hit two of the Cardinals’ season-high six homers, but the night belonged to Wainwright and Molina.

Wainwright carried a two-hit shutout into the sixth inning and even singled home Molina in the second inning. Molina delivered a grand slam in the ninth for his first homer since July 2.

“That’s about as good as it gets, man,” Cardinals manager Mike Shildt said. “Just magic. Way to commemorate an amazing, impressive milestone from two super-impressive Cardinals. Not enough superlatives to really do it justice.”

Their 300 games together make Wainwright and Molina the fourth-most prolific battery of all time. The record is held by former Detroit teammates Mickey Lolich and Bill Freehan, who formed the Tigers’ starting battery for 324 games.

The Cardinals pulled within a game of San Diego for the second NL wild card after the Padres lost to Houston 6-3.

“Every team, they know that if we get into the playoffs, we’re a dangerous team,” Molina said.

Arenado drove a two-run shot in the first inning and went deep again in the third for his 28th and 29th of the season. Molina hit a grand slam, Harrison Bader had a three-run shot, Tyler O’Neill provided a two-run blast and Edmundo Sosa added a solo shot.

The homers by Molina and Sosa were back-to-back drives with two outs in the top of the ninth.

Wainwright (14-7) allowed two runs — one earned — and four hits in 6 1/3 innings. The 40-year-old right-hander struck out four and walked three.

“I did get a little chill bumps walking out in the first inning,” Wainwright said. “The crowd, there was a bunch of Cardinals fans above our dugout. They were going crazy. I was thinking that’s pretty neat.”

The Cardinals have won each of Wainwright’s last nine starts in Milwaukee. Wainwright owns a 19-12 career record against the Brewers and has more wins against them than any other opponent.

Wainwright’s had Molina behind the plate for nearly all those games.

The Cardinals put this game out of reach early by grabbing an 8-0 lead in the first three innings.

All-Star right-hander Freddy Peralta (9-4) was ineffective for Milwaukee in his first start since Aug. 18. Peralta, who had been on the injured list with inflammation in his throwing shoulder, lasted just two innings and gave up four earned runs and three hits.

This marked just the second time in 23 starts this season that Peralta had allowed more than three earned runs. He struck out four but walked two and hit a batter.

“He was rusty and didn’t execute everything,” Brewers manager Craig Counsell said. “I thought they hit some good pitches.”

Justin Topa replaced Peralta and gave up four runs in the third inning before departing with right elbow discomfort. Topa, who has had Tommy John surgery twice in his career, spent most of this season on the injured list with an elbow problem and didn’t make his 2021 debut until Aug. 12.

Counsell said Topa would undergo an MRI and head to the injured list.

Brewers outfielder Christian Yelich was ejected from Friday’s game after he already had stopped playing in it.

Yelich was removed from the game at the start of the fifth inning with the Brewers trailing 8-0, but he continued to watch the action from the dugout. After Milwaukee’s Lorenzo Cain struck out in the bottom of the fifth, home plate umpire Greg Gibson ejected Yelich for arguing.

That wasn’t Yelich’s first gripe about Gibson’s umpiring. Yelich had complained after getting called out on strikes in the fourth.

Cardinals: RHP Junior Fernández has a grade-2 lat strain and will miss the rest of the season. Fernández was 1-0 with a 5.66 ERA in 18 appearances. … The Cardinals recalled RHP Jake Woodford from Triple-A Memphis.

Brewers: 3B Eduardo Escobar and Peralta were activated from the injured list. 2B Kolten Wong went on the paternity list and RHP Alec Bettinger was optioned to Triple-A Nashville.