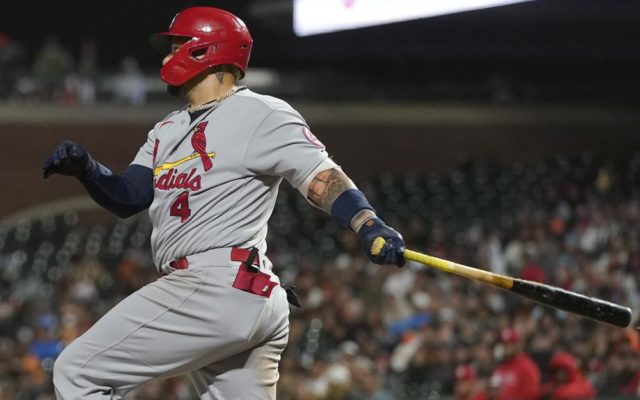 SAN FRANCISCO (AP) — The St. Louis Cardinals arrived in San Francisco having just dropped three of four to the Rockies at Coors Field in frustrating fashion.

Holding off the Giants in two close games now has the Cardinals believing they’re right back on track as the All-Star break nears.

“These wins right now, they feel like we can play with anyone, we can beat anyone, we just need that mojo,” Wainwright said.

St. Louis left fielder Dylan Carlson made a tremendous game-ending catch at the wall with runners on first and third.

“We fought our tails off the whole game,” manager Mike Shildt said. “That was a huge play by Dylan.”

Yadier Molina added a run-scoring single in the seventh before Sosa connected in the eighth. The Giants scored twice in the bottom half, getting Mike Yastrzemski’s RBI single and a double by Wilmer Flores.

Genesis Cabrera allowed two baserunners in the ninth, including a four-pitch walk to Donovan Solano, then gave way to Justin Miller one out later and he finished for his first save after Carlson’s catch on a long fly by Jason Vosler.

Arenado hit a two-run homer in the first off Johnny Cueto (6-5) before Brandon Crawford’s two-run single in the third tied it.

Wainwright (7-5) came out on top pitching opposite Cueto for the fifth time, having beaten the Giants right-hander twice when he was with Cincinnati while losing two starts in 2016 — Cueto’s first year in San Francisco.

Crawford had an RBI double with one out in the fifth but Wainwright escaped further damage.

“Tonight I thought we had really good at-bats,” Giants manager Gabe Kapler said. “The ball didn’t fall for us and we can do better but I thought the at-bats were fairly strong.”

In the sixth, Jose Rondon grabbed at his left hand after running into Cueto covering first. The pitcher tried to barehand a short toss from first baseman LaMonte Wade Jr. but dropped the ball before scooping it up to tag Rondon, initially called safe. The Giants challenged the ruling and it was overturned on replay review.

Wainwright, who had allowed two or fewer runs in his previous five starts, gave up three runs and six hits in six innings. He pitched in San Francisco for the first time since a 5-2 loss on Sept. 19, 2016.

Cueto lost back-to-back starts for the second time this season.

“He is stretched out to give us as much length as we need,” Kapler said, calling Beede a possibility to pitch Friday’s series opener against the Nationals.

Cardinals: OF and cleanup hitter Tyler O’Neill had been slated to start for the first time in four games since getting hit in the right pinkie by a pitch Friday at Colorado but instead was a late scratch because of an allergic reaction to food that he ate. … RHP Carlos Martínez is still dealing with a bruised thumb on his pitching hand suffered at the plate Sunday at Colorado that forced him to exit in the fourth inning. His status to make his next start remained unclear. “We’re trying to figure out what’s going on with Carlos and his hand,” Shildt said. “He’s got to throw a side today or tomorrow.”

Giants: C Buster Posey was going through pregame work with the hope he could be available to pinch hit two days after bruising his left thumb Sunday at Arizona when a foul tip hit him. “The most important thing we can do with Buster right now is check in with him on a daily basis,” manager Gabe Kapler said. … OF Jaylin Davis went on the injured list with a strained left hamstring that he injured Monday. … 1B Brandon Belt (right knee inflammation) hit off a tee and threw out to 110 feet. …RHPs Reyes Moronta (right flexor strain) and Aaron Sanchez (right biceps tightness) each threw live batting practice Tuesday — one inning and 20 pitches for Moronta and two innings and 40 pitches for Sanchez.

The NCAA champion Stanford women’s basketball team was recognized on the field before the game and star Haley Jones threw out a ceremonial first pitch.