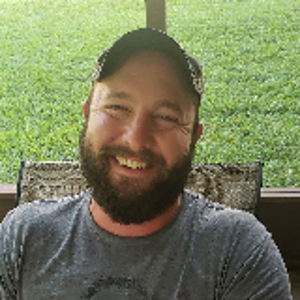 The world became a little dimmer on November 30th when Aaron Paul Swopes started a new beginning along life’s path. Born in Colorado in 1982, and raised up proper in Missouri, he became a man of integrity and loyalty. He earned the rank of Eagle Scout with the title of Fire Starter of the Tribe of Mik-O-Sey. He knew the ways of our Native American Brothers and Sisters and held in his heart the respect of the earth and all that dwelt on it.

He was a skilled outdoorsman and was able to kindle the warmth of a fire with a wooden bow-drill, patiently bringing forth a flame, just as he brought forth the values in his children that anyone would envy.

Aaron served as a Corrections Officer in Cameron, MO. After attending the Police Academy in St. Joseph, Missouri, earning acknowledgment as the number one student in his class, he served as Law Enforcement Officer at Platte City, Mo. He then worked for Union Pacific Railroad in the Kansas City yard.

Earlier this year he happily realized a 12-year dream and established Long Line Distillery with Windy Wine Co through the loving support of the Keesaman Family in Osborn, MO; his second family. With hard and exacting work, the business grew faster than Aaron had anticipated. People liked it. The product was one of quality and consistency. A product people enjoyed, much like the man himself, a man of quality and consistency. Orders for his whiskey were being taken as fast as he could produce it. Just a week ago, Aaron was looking at purchasing more equipment to meet the demand.

Aaron’s sons Colton (21), Andrew (16) and Logan (11) adored their Dad, and he in return deeply loved his sons. Aaron adopted his daughter, Halle (20), and loved her as his own. Aaron so very much loved his Mother Christine Knott and when they were together, he would swallow her diminutive frame in his arms and give her the best hugs a mother could ever want. Aaron’s Dad, Marlin Swopes taught him to become a man of will and determination. And Marlin taught Aaron a thing or two about fishing. Apparently, Aaron paid attention (Except for that one time at 3 in the morning when he was sporting for catfish at Smithville Lake with his bonus Dad Dewayne and fell asleep; losing his pole and nearly falling out of the boat. But most times, he could out-fish nearly everyone around and was pretty handy with a fillet knife, too. Aaron’s sister, Jennifer (Swopes) Clark and son Evan (9), moved to Utah and Aaron continued to reach out to her across the miles. Aaron embraced Sara (Knott) Eckhardt as a sister, both of them having respect for each other that goes beyond friendship. Anyone who knew Aaron knew that when they smelled that BBQ smoke coming from his driveway, there was going to be some good eating. Aaron enjoyed cooking whether as a charcoal purist or in the kitchen with his wife Juanita. They enjoyed spending time trying to outdo each other at the stovetop and singing country songs together.

The family and friends of Aaron are blessed to have been part of his circle of life and to know his good-hearted spirit of mischief. He valued loyalty, honesty, and trust; a friend to everyone who lived by these values. The circle is broken, but only for a moment, it will mend. The moment may seem as an eternity, but Aaron’s intense desire to always teach the right thing will live through those who loved him and through his children and his children’s children.