Meet Hayzer! Our Pet of the Week! 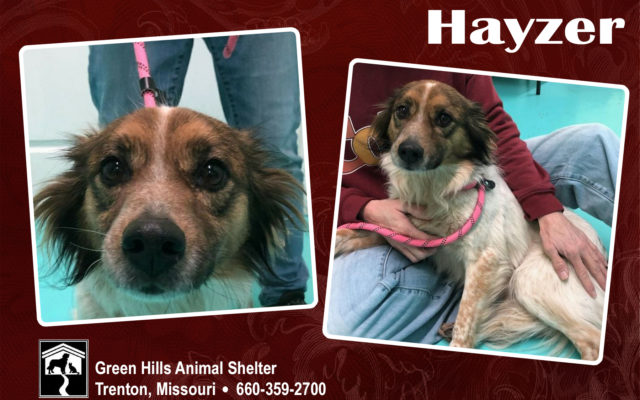 We’d like to introduce you to Hayzer! Hayzer is an Australian Shepherd mix who came to Green Hills Animal Shelter after being found wandering alone on the streets. We believe Hayzer to be approximately 5 to 6 years old, and we are so thankful that he was brought to the shelter where he is safe from the winter weather while he waits for his Forever Home.

If we could use only one word to describe Hayzer, that word would be “sweet”, because Hayzer is the definition of sweetness! He is very gentle, very calm, and very loving, and Hayzer is always ready to snuggle. His easy going personality would make him a great fit in a home with children or other dogs, and his “smedium” (he’s on the small side of medium) size makes him just perfect for cuddling.

If Hayzer could describe his perfect Forever Home, he would ask for a home where he could spend lots of time with his family. He would love a fenced yard to keep him safe when he is outside and a family who would take him on long, leashed walks.  He would be quite happy to share his home with children or other dogs, and he would especially love a home where he could snuggle with his humans and get to spend time being a lap dog.

Hayzer will go to his Forever Home neutered, de-wormed, heartworm tested, and up to date on all vaccinations, including rabies.  He is full of love to give and sweetness to share; could you make his dream of a Forever Home come true?

For more information on Hayzer or any of the pets waiting for their homes at Green Hills Animal Shelter, please phone the shelter at 660-359-2700 or stop by during open business hours. Hayzer and his fur-riends would love to meet you, and so would we!