Pet Of The Week – Arrow 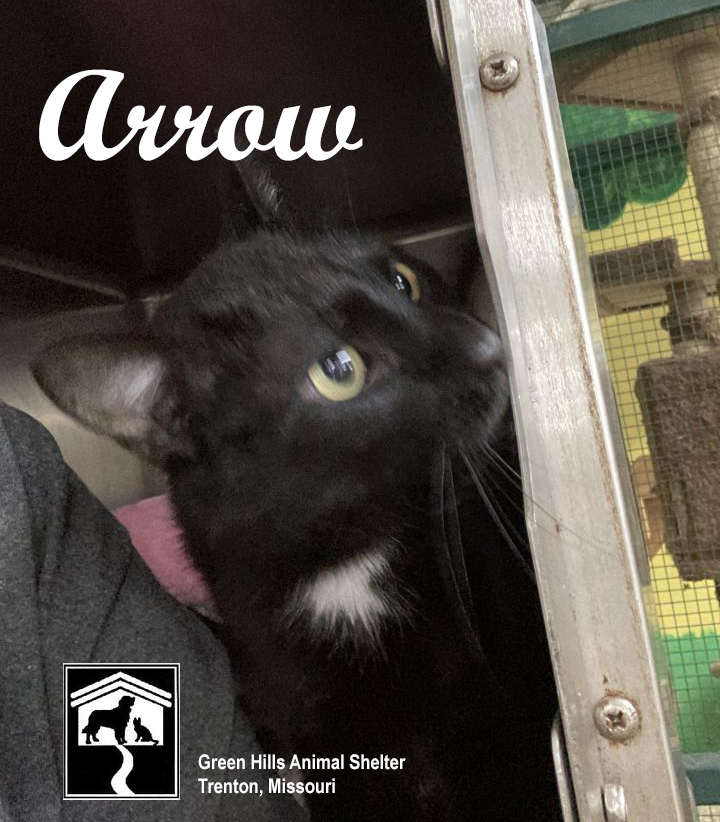 We’d like to introduce you to Arrow!  Arrow is a gorgeous adult male house panther who sports just a smidgeon of white on his chest and in his unique white ear furnishings.

Arrow came to Green Hills Animal shelter in May after being found trying to survive on his own on the streets of Trenton. After arriving however, it quickly became clear to staff and volunteers that Arrow wasn’t a tough street kitty, but rather a big friendly boy who loves people and gets along well with other cats.

If we could only choose one adjective to describe Arrow, that adjective would be “laid back”, because Arrow is a mellow boy. He enjoys being petted, but doesn’t require constant attention and is quite content to nap the day away in his cozy bed.  One of Arrow’s most endearing traits is his love of having something to snuggle in. Whether it’s a cozy bed, a soft kitty tent or a hammock, Arrow loves to burrow and snuggle down … he is all about being warm and cozy!

If Arrow could describe his purr-fect Forever Home, he would ask for an indoor home with a soft bed of his own and lots of kitty toys. He would love a cat house in the corner of the living room that he could snuggle in while being close to his family and perhaps even a cat tree of his very own where he could climb up and watch the world go by.  Arrow would very much enjoy being a part of a family with children, and he would also enjoy a home with other cats.

Arrow will go his Forever Home neutered, de-wormed, FIV/FeLV tested, and up to date on all vaccinations including rabies.  He is a sweet boy who is anxiously waiting for a family of his own; could that family be yours?

For more information on Arrow, or any of the pets waiting for their homes at Green Hills Animal Shelter, please phone the shelter at 660-359-2700. We’ll be honored to introduce you to our pets and assist you in finding a new furry-family member!