Pet Of The Week – Bowie 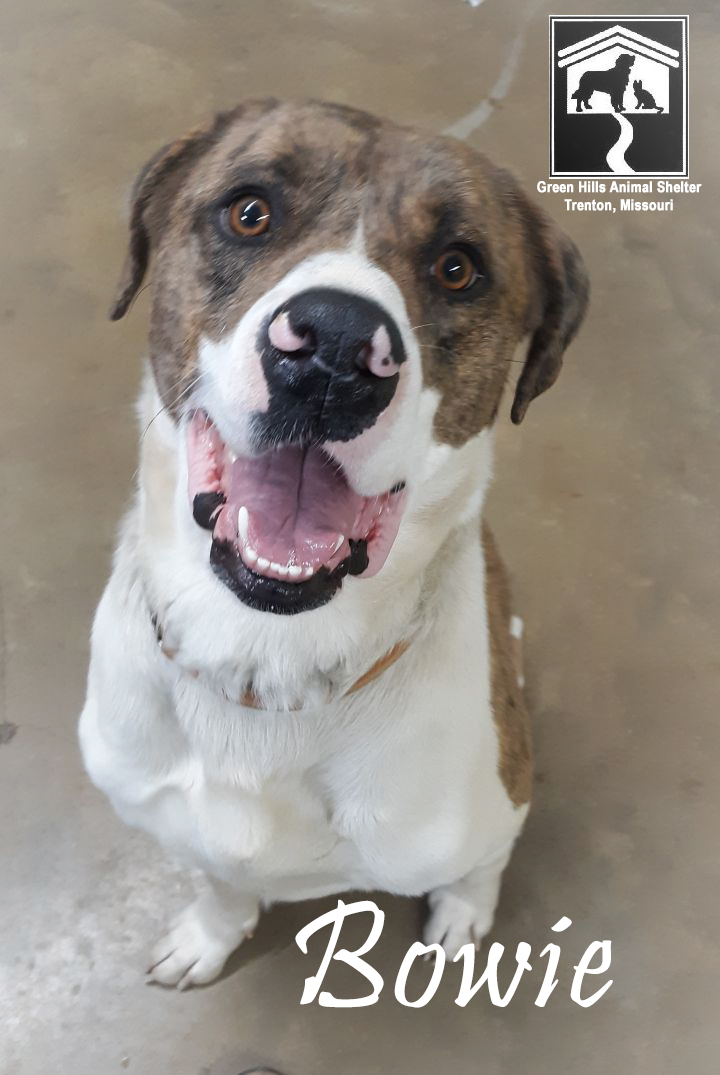 We’d like to introduce you to Bowie! Bowie is an Australian Heeler/Boxer Mix who will steal your heart with his sweet smile, kind personality, and his adorable black and pink nose.

Bowie is only about 1 ½ years old, and prior to coming to Green Hills Animal Shelter he had a home of his own where he was treasured and loved.  He lived with a kind person who cared for several dogs and cats, including Bowie. However, when Bowie’s owner became very ill, Bowie and the other pets found themselves alone and in need of rescue.

With snow and ice on the ground and temperatures dropping to sub-zero levels, a rescue plea went out for help to try and get Bowie and his friends to safety.  They were in a very rural area where the roads were impassible to most vehicles, but a network of rescuers stepped up and, with a volunteer going in and driving them out to the main road, Bowie and his friends were transported to safety.

At the shelter, Bowie’s endearing personality quickly shined through. He is a happy boy who is very sweet and very loving. His specialty is stealing hearts, and being petted is Bowie’s favorite activity. And Bowie’s loving personality doesn’t only include humans; Bowie does great with other dogs, cats, and children.

If Bowie could describe his perfect home, he would ask for a Forever Home where he would be loved and treasured, and where he could spend as much time with his family as possible. He would love a fenced yard where he could safely enjoy the outdoors, savoring the smells and perhaps playing a game of fetch with his Forever Humans. And, while Bowie would be perfectly happy being an only-dog, he would also very much enjoy sharing his home with other dogs, cats or children.

Like all pets at Green Hills Animal Shelter, Bowie will go to his Forever Home neutered, de-wormed, heartworm tested and up to date on all vaccinations, including rabies.  This boy is sweetness through and through; could you find it in your heart to give him the home he so deserves?

For more information on Bowie, or any of the pets waiting for their homes at Green Hills Animal Shelter, please phone the shelter at 660-359-2700, or stop by during normal business hours.  Bowie and his friends will be anxiously waiting to meet you!