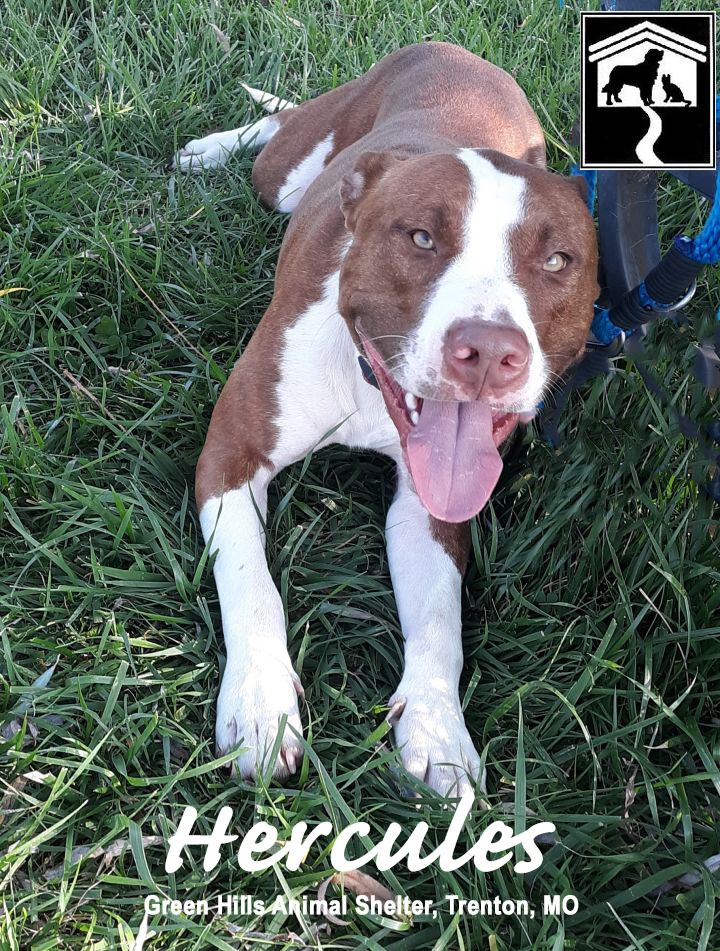 We’d like to introduce you to Hercules!  Hercules is a 1 ½ year old Pit Bull/Hound mix who, in the short time he has been at Green Hills Animal Shelter, has stolen the hearts of everyone he’s met!

Just a few weeks ago, Hercules had a home of his own where he was very, very loved.  But one day the rules changed, and Hercules’ owner could no longer have pets in their apartment. The day Hercules was brought to the shelter was full of tears for Hercules and his owner, as well as for the shelter staff who walked him to his new kennel after watching their heartbreaking good-bye and promising to find Hercules a home where he would be loved and treasured.

It was obvious how much Hercules missed his home as he sat at his kennel door, waiting loyally for his owner to return. But Hercules is an amazing dog, and as he adjusted to life at the shelter, his happy, lovable personality quickly came bubbling back through.

Hercules is a dog who loves everyone he meets and is perpetually smiling. He loves to play and is anxious to please his humans. Hercules is also very intelligent and well trained.  He knows a number of commands, including “sit”, “shake”, “lay down”, “high-five”, and “sit pretty.”  He loves to play “fetch” and when you throw the ball for him, he will happily retrieve it and bring it back to you every single time – sometimes even with an impressive “catch it on the bounce” maneuver!

If Hercules could describe his perfect home, he would ask for a home full of love with a forever family who would give him lots of affection. He would love to go on long walks and to have a fenced in back yard where he could run and play catch with his people. Hercules is used to being an indoor dog, so he would prefer a home where he could live indoors with his family and curl up on a soft dog bed and snore softly while his heart overflows with love.  He would prefer a home without cats, and would respectfully ask to meet any other dogs in the home prior to being adopted to make sure they will be good friends.

Hercules will go to his Forever Home neutered, de-wormed, heartworm tested, and up to date on all his vaccinations, including rabies.  His heart is absolutely overflowing with love to share – could he share that love with you?

A video of Hercules is available at: https://www.facebook.com/greenhillsanimalshelter/videos/841658396669580

For more information on Hercules, please call Green Hills Animal Shelter at 660-359-2700 or email us at [email protected] . You may also drop by the shelter, which is located at 3041 East 10th Street, Trenton. The shelter is open Mon, Tue, Wed, Fri and Sat from 1:00PM-5:00PM, and by appointment only on Thursdays.