The 2022 Missouri legislative session has officially begun.  Our state’s regular session spans from the first week in January to the middle of May.  The Speaker of the House started assigning bills to committee for possible hearings on January 6, and he had plenty to choose from.  Legislators could start pre-filing bills on December 1, and from then until now there were 770 bills pre-filed in the House.  Another 413 bills were pre-filed in the Senate for a total of 1,183 pre-filed bills.

Two of the topics I am sure will get early priority are ag programs and redistricting.  Last year, it was identified that several meaningful programs to help our farmers and ranchers in agriculture were expiring.  Bills were filed to renew the best ones, which were passed in the House but ended up dying in the Senate due to dysfunction in that chamber over a separate issue.  So this year the ag program renewals will be a top priority to move through the House early, and hopefully they will see a better fate in the Senate.

Regarding redistricting, this is the year the legislature redraws the boundaries of our state’s eight Congressional districts.  Ideally, these new boundaries, which must be approved by the House, Senate, and governor, will be set by February 23 because that is when filing opens for candidates to run for Congress.  It will be a tall order to get something as complicated as redistricting done in seven weeks, so that date may get pushed back.  I thought we would have dealt with redistricting in a special session last fall, but the governor chose not to call one, so here we are.

Regarding the other bills, there is no way we have time to fully vet and debate 1,183 bills, and frankly many of them are not great ideas.  The legislative process is designed to be slow and difficult so that only the best bills make it through the process, separating the wheat from the chaff, so to speak.  As chair of one of the more important committees in the House, I play a role in that filtering process, which I take very seriously.  It is an honor to be a part of the process of insuring that if your life changes by the actions of state government that it changes in a positive way.  Throughout this session, I will keep you apprised of the progress of notable legislation through my weekly reports. 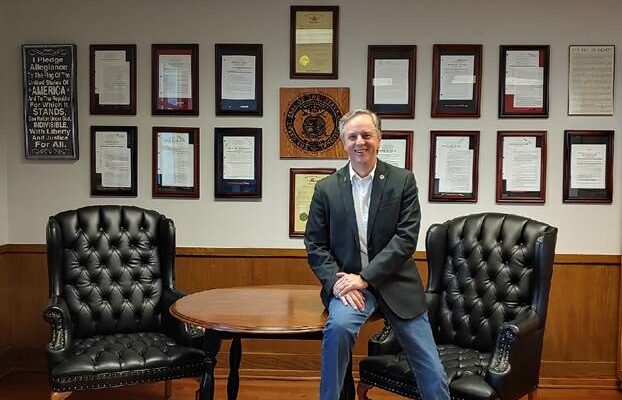 The proposed congressional map balances several required criteria including compliance with the Missouri and U.S. Constitutions as well as the Voting Rights Act. The map’s districts are compact, contiguous, and equal in population. The districts adhere to the doctrine of “one person, one vote” and have preserved the cores of each existing congressional district to the greatest extent possible.

“This is a fair and constitutional map with common-sense boundaries that everyday Missourians can recognize,” said the chair of the Senate Select Committee on Redistricting. “This map, which must be passed by both the House and Senate, is also drawn to achieve the greatest amount of consensus possible.”

He added, “My House counterpart and I chose to make this joint announcement to emphasize the great care that went into drawing a map we were confident could survive legislative, judicial, and public scrutiny.”

The chair of the House Special Committee on Redistricting said, “The task of creating this congressional district map required balancing the legislative process while maintaining compactness, contiguity, equal population, and preserving the existing districts’ core identities. I look forward to working with my House and Senate colleagues to deliver HB 2117 to Governor Parson for his signature without delay.”

The proposed maps are available at the following links:

As 2021 came to a close, Gov. Mike Parson announced that Missouri’s COVID-19 related State of Emergency would expire and not be renewed on December 31. Parson first issued an Executive Order (EO) declaring a State of Emergency due to COVID-19 on March 13, 2020.

Parson said, “Thanks to the effectiveness of the vaccine, widespread efforts to mitigate the virus, and our committed health care professionals, past needs to continue the state of emergency are no longer present. Over the last 22 months, we have coordinated with local, state, and private partners to mitigate COVID-19 and work towards returning to normalcy. We all now know how to best fight and prevent serious illness from this virus. The State stands ready to provide assistance and response, but there is no longer a need for a state of emergency.”

Gov. Parson extended the COVID-19 related State of Emergency five times before issuing a final targeted executive order for health care needs in August 2021. Currently, only three of Missouri’s bordering states and 20 other states in the nation have state of emergencies related to COVID-19 in place.

At one time, nearly 600 statutory and regulatory waivers were approved across Missouri state government. Since that peak, waivers have reduced by nearly 80 percent. All remaining COVID-19 related waivers authorized under EO 21-09 officially terminated on December 31, 2021.

“In Missouri, we never had mandates or forced lockdowns,” said Parson. “The main focus of our state of emergency was to provide regulatory flexibility to support and assist Missourians, health care facilities, and businesses and coordinate a COVID-19 response that saved lives and livelihoods. We encourage all Missourians to consider COVID-19 vaccination and to stay diligent, but we can work together to fight COVID-19 while living our normal lives. It is time to take this final step and move forward as a state.”

Gov. Parson emphasized that the best method to prevent serious illness from COVID-19 is vaccination, and more and more Missourians continue choosing to get primary and booster vaccinations. In the month of December alone, more than 565,000 doses of vaccine were administered and 42 percent were part of a primary vaccine series. The governor noted that nearly 94 percent of Missourians 65 and older, the most vulnerable, have received at least one dose. More than 73 percent of Missourians 18 and older and over 62 percent of all Missourians have chosen to initiate vaccination.