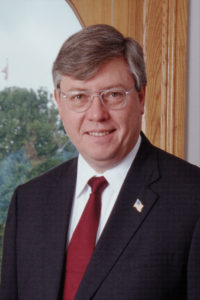 WASHINGTON D.C. – Graceland University’s 16th president Dr. John K. Menzies passed away on Satutday. Dr. Menzies served as president from 2002 through 2006. He was originally appointed to the Board of Trustees in 1998.

Prior to joining Graceland as President, Dr. Menzies was Chief of Mission at the U.S. Office in Kosovo and served as the U.S. Ambassador to Bosnia-Herzegovina.

After Graceland, he served as the Dean of the School of Diplomacy and International Relations at Seton Hall University. Through in career in foreign service and academia, he was given a multitude of awards, including the Department of State Superior Honor Award, the American Bar Association award for dedication and service toward advancing the rule of law, and the Bulgarian Order of the Madarsky Konnik.

A memorial service will be held for Ambassador Menzies on April 3rd in Washington D.C. The Graceland flag on the Lamoni campus is flying at half-staff in his honor.