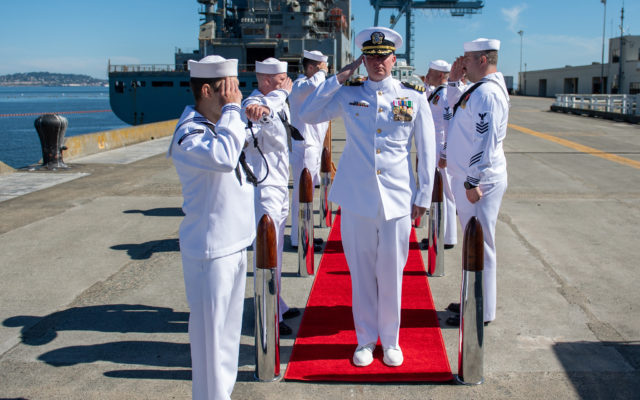 A crowd of installation personnel, family and friends gathered on the installation’s pier to observe this time-honored Navy tradition where command is transferred from one officer to another.

“Our team is a small, highly skilled and dedicated team and it has been an absolute pleasure working with all of you,” Emerson said.

“Don and team, you should all be extremely proud of everything you’ve done over the last two years,” Collins said.

The Indian Island team safely handled more than 85,000 tons of conventional ordnance and supported 48 vessels at the installation’s pier without any significant issues during Emerson’s two years in command.

“I’m so proud of everything we have accomplished together during this time,” Emerson said. “From safely and effectively supporting every Navy, Joint and Allied ship that came to our pier; completing mission-critical infrastructure upgrades; supporting community-led environmental restoration efforts; to successfully implementing measures to protect the health of everyone who works at this installation during the pandemic.”

Within the past two years, the Navy has recognized the Indian Island team for their dedication to supporting the Fleet and for being good stewards of the environment. Indian Island was the recipient of the 2020 Commander, Navy Installation Command Installation Excellence Award for small non-industrial installations and the 2019 Secretary of the Navy Environmental Award for sustainability.

Collins presented Emerson with a Meritorious Service Medal for his outstanding service as Commanding Officer of Naval Magazine Indian Island.

“There’s no doubt in my mind that Don will approach his new role with the same integrity, motivation, and dedication that allowed him to successfully command the team here at Indian Island,” Collins said.

Emerson, a native of Great Bend, Pennsylvania, graduated from Embry-Riddle Aeronautical University in 2002 with a Bachelor of Science in Aerospace Engineering. He reported to flight school and earned his wings in December 2004.

Emerson has more than 2,400 flight hours in both fixed-wing and rotary-wing aircraft. His personal awards include a Meritorious Service Medal, an Air Medal, Navy Commendation Medal (three awards), Navy and Marine Corps Achievement Medal, and various unit and campaign awards.

Emerson’s next assignment will be on USS Makin Island (LHD 8) based out of San Diego, California.

Cmdr. Crouse assumed command of the installation upon reading his orders in front of the crowd.

“I am confident that Andrew’s experiences and skills will serve him well in this new role,” Collins said. “I know he has a great team of professionals right by his side to help him succeed.”

Crouse, a native of Easton, Missouri, was commissioned through the Naval Reserve Officer Training Corps (NROTC) at the University of Missouri after graduating with a Bachelor of Science in Agricultural Systems Management in 2005. Upon graduation, he reported to Naval Air Station Pensacola to begin flight training and he was designated an E-2 Hawkeye Naval Flight Officer in 2008.

Crouse most recently reported to U.S. Strategic Command in May 2019 and served as a Cyber Watch Officer and Global Network Operations Control Center Deputy Branch Chief.

“To the NAVMAG Indian Island team, I am truly honored to be joining such a great team on an installation so rich in history,” Crouse said.

Naval Magazine Indian Island is the U.S. Navy’s only deep-water ammunition port on the West Coast. Its 1,600-foot pier can handle the largest Navy and commercial vessels afloat. The 2,700-acre island is also home to the Department of Defense’s largest ordnance storage site on the West Coast with more than 100 magazines that store conventional munitions ranging from small arms ammunition to aircraft ordnance to ship-launched missiles.