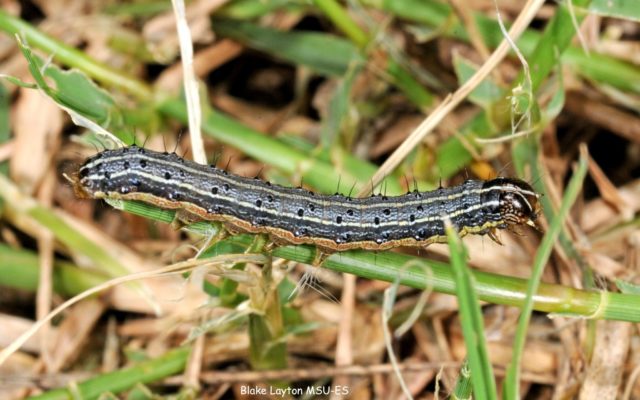 (Radio Iowa) The Iowa State University Extension Service is getting reports of a pest that’s damaging hay fields, pastures and even some lawns. Gentry Sorenson, an I-S-U Extension field agronomist based in northwest Iowa, says it’s a caterpillar known as the fall armyworm.

“The fall armyworm basically blew up as a moth from Florida and the Gulf Coast area through the hurricane winds,” he says. “The armyworm that we’re seeing is the rice strain and that strain of fall armyworm particularly feeds on alfalfa and forage grasses.” The fall armyworm can grow to be up to an inch and a half long. Sorenson says farmers can use an insecticide if the bugs are causing a lot of damage.

“The best times to scout for fall armyworm are early mornings or late in the evenings,” he says, “mainly because the fall armyworm is more of a noctural pest and they come out at night and do a lot of feeding at night or when it’s cooler.” Sorenson says some parts of southern Iowa have been hit hard by fall armyworm infestations that drifted here due to winds from Hurricane Ida, but even farmers in northwest Iowa are starting to see the pest in their fields. The bugs flourish in warm climates, according to Sorenson.

“So once we see the hard freeze, it will essentially wipe out the fall armyworm population,” he says. The rice strain of the fall armyworm is found primarily in the southeast United States and cannot survive the mild winter in Alabama according to that state’s Extension Service. The bug is known to feed on crops like rye, wheat and oats as well as rice and various grasses.