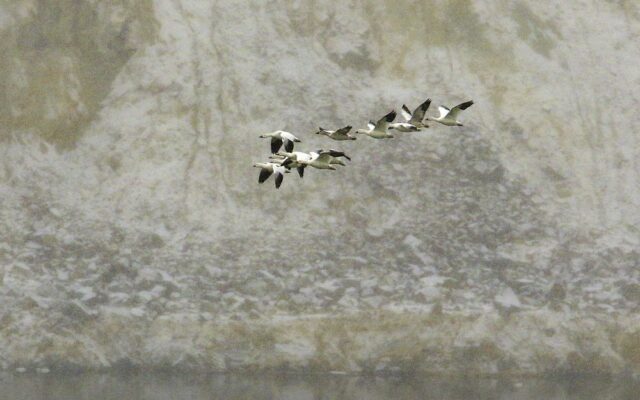 Photo by Walter Hinick /The Montana Standard via AP

“We collected a number of dead birds last Monday — I think the total number was around 70. They were all snow geese that we collected, and the D-N-R tested 10 of them, and send them out to the lab. Then, we got reports back this week that they were positive for the avian flu virus,” Schwab says. Schwab says it’s not uncommon for wild birds to have the bird flu.

“The avian flu is always present in the wild bird population,” he says. “It’s just this is the strain that crosses over to domesticated flocks very quickly. So, from the guidelines we were getting, have individuals watch their flocks. A big way that it’s transmitted is through the feces of the wild birds. So, there are a lot of wild birds around domesticated flocks. Just watch for the symptoms in the domesticated animals.”
Symptoms include decreased water consumption, lack of energy and appetite, soft or thin-shelled or misshapen eggs, swelling of the head, eyelids, comb, wattles and hocks, difficulty breathing, and coughing, sneezing and nasal discharge, among others. Though health experts say bird flu is highly contagious and often fatal to domestic bird populations, no human cases of avian viruses have been confirmed in the U-S. Schwab encourages residents to enjoy outdoor wildlife–with caution.

“We’re still telling people to definitely go out and enjoy it,” Schwab says. “Just kind of use common sense when dealing with wild animals. Stay a good distance from them, and definitely, if you see a dead wild animal, if it’s in the parks, contact my office and definitely stay away from it.” He adds hunters and others should use extra precautions when handling wild game–especially during processing. Anyone suspecting signs of H-P-A-I in their flocks should contact their local veterinarian, or the Iowa Department of Agriculture.
This would be the sixth case of bird flu confirmed in the state.