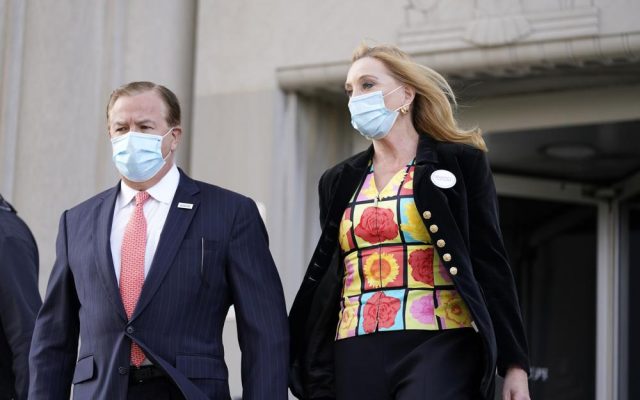 FILE - In this Oct. 14, 2020, file photo, Mark and Patricia McCloskey leave following a court hearing, in St. Louis. The McCloskeys, accused of waving guns at racial injustice protesters in the summer of 2020, are due back in court Friday, April 30, 2021, when a judge will consider whether to send the case back to a grand jury to decide if they should have been indicted in the first place. (AP Photo/Jeff Roberson, File)

Governor Parson has pardoned attorneys Mark and Patricia McCloskey. The Governor’s Office made the announcement as part of a list of individuals who have been pardoned or had their prison sentence commuted.

The Central West End pair made international headlines after they pointed guns at social justice protesters walking down their private street in 2020.

The St. Louis Circuit Attorney’s Office filed charges against the couple. They pleaded guilty in June to misdemeanor charges, resulting in fines – not jail time.

The governor is one of the architects of Missouri’s Castle Doctrine – a law allowing residents to use force against intruders in their home. On a St. Louis radio show last year, Parson said he would probably end up pardoning the McCloskeys.