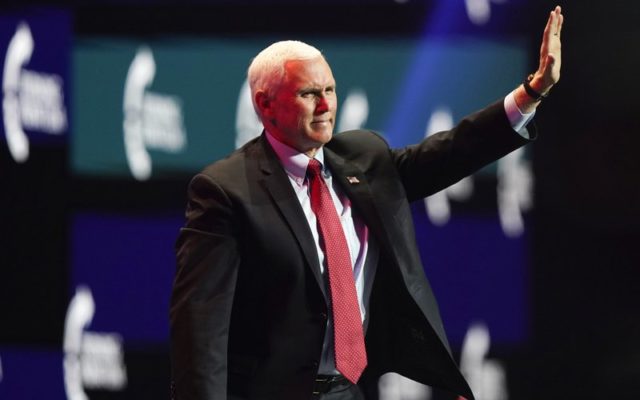 AMES, IA (Radio Iowa) Former Vice President Mike Pence rallied with Iowa G-O-P activists this weekend — encouraging Republicans to consider the 2022 election as part of the march to electing a Republican president in 2024.

“Let’s offer to the American people not just an argument against who’s in office,” Pence said, “but let’s offer a bold vision for the future grounded in conservative principles.” Pence highlighted the record of the Trump-Pence administration on issues like trade and immigration and drew cheers from Iowa audiences when mentioning the three justices Trump appointed to the U.S. Supreme Court.

“Men and women, we have a record that we can be proud of, but how times have changed,” Pence said. “…The truth is President Biden has done more damage to America in 15 months than any president in my lifetime.” Pence, who was born during Dwight Eisenhower’s presidency, spoke at Iowa G-O-P district conventions in Carroll and Independence, then on Saturday night he was the headliner for a Story County G-O-P fundraiser in Ames — delivering the same critiques of the Biden Administration at each stop.

“President Biden says the reason that gasoline prices have nearly doubled since they took office is because of the war in Ukraine,” Pence said. “Well, let me explain something: gasoline prices are skyrocketing because of the war on energy and we need new Republican majorities in Washington, D.C. to bring it to an end and unleash American energy once again.”
Pence joins a line of Republicans who’ve made trips to Iowa, signaling they may compete for the G-O-P’s 2024 presidential nomination. Pence angered some of President Trump’s supporters for failing to stop President Biden’s Electoral College victory, but on Saturday Pence was greeted with handshakes and applause. Sharon McNutt of Silver City got a brief hug after a chat with the former vice president.

“I told him I have calluses on my knees because I prayed for him,” she says, “and we had a talk about prayer.”
Steve Scheffler, president of the Iowa Faith and Freedom Coalition, says a lot can happen between now and the Iowa Caucuses, but Pence’s faith is a connection with many Iowans.

“I think Iowans and evangelicals are open minded,” Scheffler says, “that they’ll give everybody a fair shot.” Dave Struthers of Collins says he’s always been impressed with Pence and thinks he could have a shot at the presidency in four years.

“It all depends on what those diehard Trump fanatics want because some of them were not happy that he certified the election. I think he did the right thing,” Sruthers says. “…You know there were sometimes when I was hoping Trump would resign and let Mike take over, but that never happened.” This was Pence’s third trip to Iowa since the 2020 election. The Iowa Democratic Party’s chairman says voters shouldn’t forget Pence led the charge to get congress to cut taxes for the wealthy and corporations during Trump’s time in office — and it was President Biden who got a bipartisan infrastructure bill across the finish line in his first year in office.