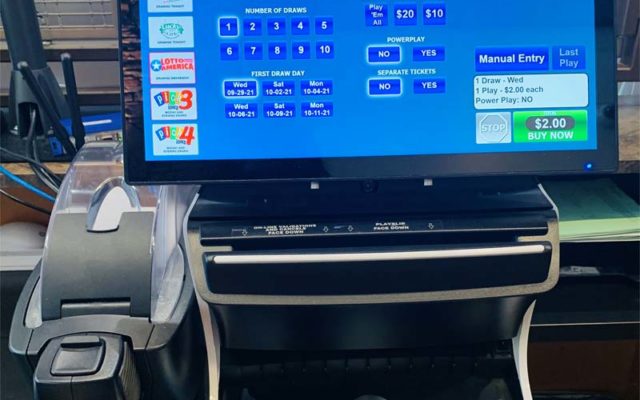 She says the number of tickets being bought for the drawing would be a week’s worth of sales when the jackpot is smaller. Neubauer says more people are buying tickets — but it seems like they are not overspending.

“Wednesday night’s drawing the average ticket purchase here in Iowa remained about seven dollars. That’s about four plays per ticket,” Neubauer says. “So we’re just seeing a whole lot of people you know, having fun and playing the game but people aren’t going overboard, and that’s a really important part of the message too. It only takes one ticket to win and we want people to continue to be safe and just have fun, but don’t get in over their heads.” Neubauer says they keep an eye on one particular figure.

“Lotteries can estimate how many of all the possible combinations in the Powerball game have been purchased for a particular drawing. It’s called coverage — meaning how many of the combinations have been covered. The coverage estimate for tomorrow night’s drawing now has risen to 60 percent,” according to Neubauer.” Again, that just shows sales are high. The higher the coverage percentage it can mean it’s more likely that there will be a jackpot winner — it’s not a definite.” Neubauer says with the large volume of ticket sales, it can take some time to determine if someone has won.

“Processing is going to take longer and especially in the really big states around the country — think New York, California, Florida — their processing time is probably going to take longer just because ticket sales have been so high,” she says. “So, I would say sometime, around midnight, maybe a little bit after midnight, the official word will come as to whether or not there was a jackpot winner.” The estimated one-point-six billion-dollar jackpot jumped the previous record Powerball prize of one-billion-586-million-dollars won in the drawing on January 13th, 2016. Neubauer says there is the possibility that the jackpot could be raised again before Saturday night’s drawing.