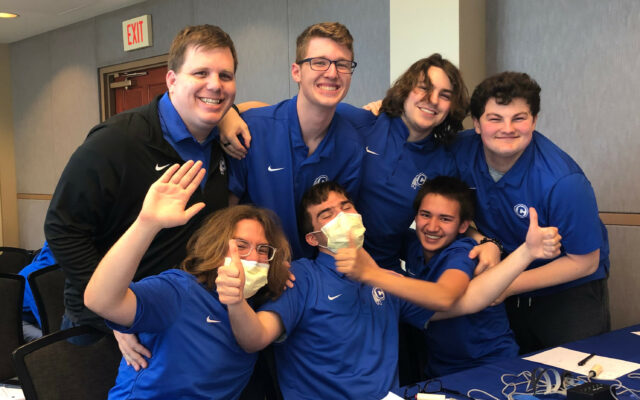 Saint Joseph Central’s Scholar Bowl Team made their eighth consecutive trip to state its most successful yet, as the Indians claimed their first state title.

Captain Frederick Rivas-Giorgi says the state championship in Class Six, earned Saturday on the University of Missouri campus in Columbia, was a culmination of the team’s hard work.

Central had little trouble with Columbia Hickman in the first round-robin match, then overwhelmed Parkway West 520-250, only to stumble against Springfield Kickapoo.

Central was the top seed in the Class Six round-robin with 1440 points, setting up a rematch with Parkway West in the final. The Indians led the Longhorns 220-190 at the half and were only up 50 with five tossups remaining, before Frederick and his brother Patrick claimed four of the last five tossups to put the game away, 430-310.

CLASS 1
After dropping a close game to Saint Elizabeth 220-170, Tarkio bounced back to defeat School of the Ozarks 290-170. A rematch of last year’s semifinal saw North Shelby again defeat the Indians, this time 240-170. Tarkio was taken to overtime by School of the Ozarks in the third-place game, and the deciding tossup was claimed by the Patriots from Point Lookout. This is the second straight fourth-place finish for Tarkio, who was led by seniors Bo Graves and Aaron Schlueter.

CLASS 2
Polo came up short in their four matches, falling in a close match to Galena before experiencing larger defeats from Eugene and Columbia Independent. Galena would defeat the Panthers in the third-place contest, 310-220. Polo was led this year by a pair of sophomores, Aden Segal and Keith Farmer.

CLASS 5
Smithville claimed third place in the Class Five tournament, defeating Rolla twice. With both teams having already lost to Saint Louis Priory and eventual champions Clayton, the two teams took their final round-robin match in stride, with Smithville overwhelming Rolla 440-170. The second match was much closer, with the Warriors squeaking out a ten-point victory in the third-place match, 360-350.