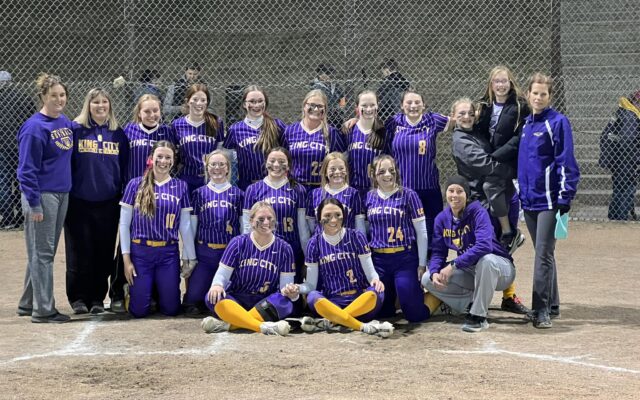 King City scored their first run with two out in the 7th and scored the ultimate game winner in the 9th was the Wildkats defeated Platte Valley 2-1 Wednesday evening in the Class 1 Sectional Game held at the Tri-C Ball Park.

The District 15 Champion Wildkats played from behind the entire game after Brylie Angle singled in Maleeah Bliley with two-out in the bottom of the first inning. Neither team threatened much again until the 7th innning. The Wildkats had not advanced a base runner to second base until Tacie Catlett doubled with one out in the 7th off Platte Valley pitcher Delaney Wolf. Sophomore Wylie McKinnon then gapped a line drive to right center field that scored Catlett with two out to force a bottom of the 7th inning. King City senior Emberlyn Medsker had only allowed one hit herself until Platte Valley threatened in the bottom of the 7th. Brylie Angle and Kali Redden both doubled with one out, but Medsker’s 7th of 9 strikeouts was one of her biggest ones when she struck out Kayley Hauber. A fly ball to left field then ended the 7th. King City went quietly in the 8th while Medsker got both 1-hitter Maleeah Bliley with a strikeout and 2-hitter Sarah Langford on a fly ball to end the 8th. In the 9th, King City’s Kinzie Pettijohn and Emerlyn Medsker both singled to lead off the inning. Tacie Catlett struck out but both runners advanced with a swinging strike went back to the screen. Carleen Gilbert then provided her second game-winning RBI of the postseason with a fly ball to le

ft field that scored Pettijohn. Medsker and King City then had to negotiate heart of the Platte Valley order. Medsker induced a ground ball to shortstop from Maggie Collins. Brylie Angle was out for the only time in the game on a ground ball to the pitcher, and Medsker’s 9th strikeout of the game ended the comeback win.