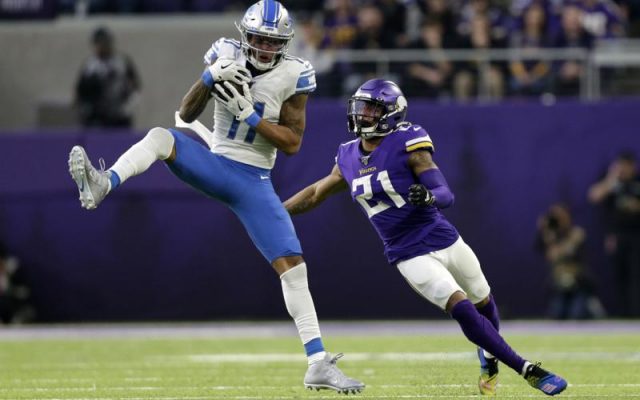 This Dec. 8, 2019, file photo shows Detroit Lions wide receiver Marvin Jones catching a pass ahead of Minnesota Vikings cornerback Mike Hughes, right, during the first half of an NFL football game, in Minneapolis. The Vikings have declined the fifth-year contract option for Hughes. The 2018 first-round pick has missed more than half of the games to injuries since he was drafted. Neck trouble that first occurred in 2019 continued last season and limited him to four games. (AP Photo/Andy Clayton-King, File)

The Vikings sent their 2022 seventh-round pick to the Chiefs for their 2022 sixth-round choice, a minimal gain for an injury-hampered player in danger of being released.

The Vikings last week declined the fifth-year contract option for Hughes, who has 13 passes defended, three fumble recoveries, and two interceptions in 24 career games. Hughes missed more than half of Minnesota’s games over the last three years to injuries, first tearing the ACL in his left knee as a rookie. He cracked a bone in his neck in the last regular-season game in 2019 that kept him out of the playoffs. Neck trouble persisted last year, limiting him to four games.

The Vikings drafted three cornerbacks last year: Jeff Gladney in the first round, Cameron Dantzler in the third round and Harrison Hand in the fifth round. Then they added two free agents at the position this spring: Patrick Peterson, the three-time All-Pro, and Mackensie Alexander, the team’s 2016 second-round pick who returned after one season away.