Pet Of The Week – Bobbi 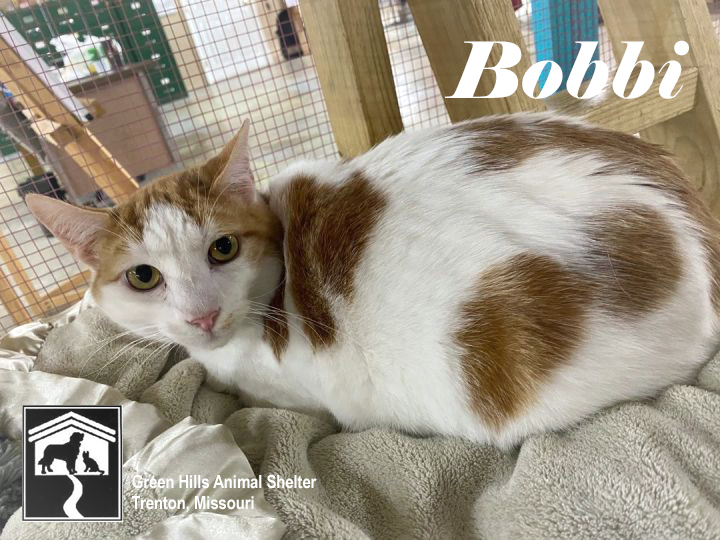 If you are looking for a unique kitty whose personality is every bit as endearing as his looks, look no further than sweet Bobbi!

Bobbi (who received his name because of his cute, bobbed tail) is an American bobtail who was recently transferred to Green Hills Animal Shelter from another shelter so that he would have a better chance of finding his Forever Home, and since arriving at the shelter Bobbi has consistently won the hearts of everyone he meets.  This sweet boy could best be described as a “loving couch potato of a kitty”.  He even looks a little like a potato!  Bobby is very friendly, gentle, and quiet, and he loves everyone.  He enjoys attention and is always ready for a good snuggle. Bobby gets along well with other cats and is litterbox trained. This super-snuggly boy has it all; except for a home and family of his own.

If Bobbi could describe his purr-fect Forever Home, he would first and foremost ask to be an indoor kitty in a home with a loving family and a comfy couch to live his best life as a couch potato kitty.  He would love to receive lots of attention and pets, and of course, he would love to get to snuggle up for a nap in his family members’ laps. Bobbi would be very content to share his home with children, another kitty or two, or even a canine companion – particularly one who would snuggle up for a nap now and then. He would also make a wonderful companion for an older person who would enjoy having a very loving, furry friend to spend their days with.

Bobbi will go to his Forever Home neutered, de-wormed, FIV/FeLV tested, and up to date on all vaccinations including rabies.  This sweet boy just wants to find a family and a comfy couch of his own; could you make his dream of a Forever Home come true?

For more information on Bobbi, or any of the wonderful pets waiting for their Forever Homes at Green Hills Animal Shelter, please phone the shelter at 660-359-2700 or stop by during open business hours.  Bobbi and his fur friends will be so happy to meet you!