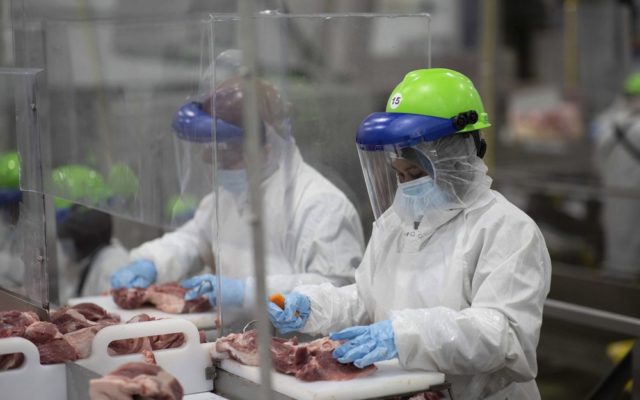 (Radio Iowa) The Biden Administration is providing another 800 million dollars to support smaller scale beef, pork and poultry plants and is establishing a new tipline for whistleblowers from the meatpacking industry. President Biden says the four largest meat packing companies are distorting prices for farmers and for consumers.

“Capitalism without competition isn’t capitalism. It’s exploitation,” Biden said. “That’s what we’re seeing in meat and poultry — in those industries now.” U.S. Agriculture Secretary Tom Vilsack says the goal with this new batch of federal grants and loans is to invest in at least 15 small packing plants and to take steps to recruit and train new workers for the industry.

“Then $50 million of it is going to be utilized for technical assistance and research,” Vilsack says. “We’re going to need a lot of innovation in this industry. We’re going to need to new business models…and small and mid-sized facilities need to have this opportunity, as opposed to the ‘big four.'” The ag department and the U.S. Justice Department are creating a new portal to handle reports of anticompetitive behavior in the meatpacking industry. U.S. Attorney General Merrick Garland says the agencies are committed to vigorous enforcement of anti-trust laws.

“When we talk about promoting competition in the agricultural sector, we are talking about whether a farmer or rancher will be paid a fair and competitive price for their goods and labor,” Garland says. “When we talk about protecting consumers in this context, we are talking about whether food will be affordable for everyone in America.” Iowa Farm Bureau president Brent Johnson participated in yesterday’s (Monday’s) White House forum. Johnson urged Biden to work with Iowa’s congressional delegation on a price transparency bill to ensure farmers are paid an honest price for their cattle, hogs and poultry. Several of the Iowans who serve in the U.S. Senate and House said via Twitter that they were pleased to see the bipartisan bill was highlighted during Monday’s summit.