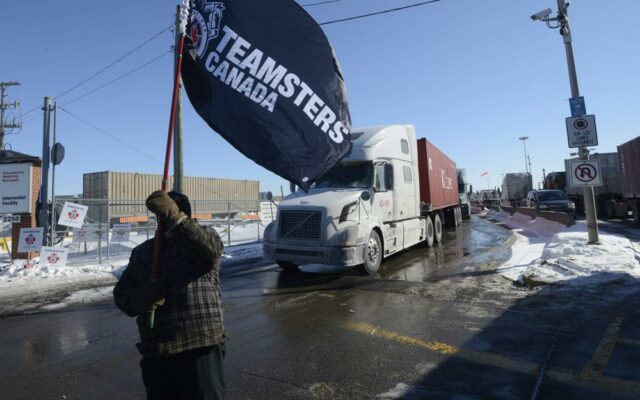 A Canadian Pacific Railway worker walks the picket line while on strike at the Cote Saint-Luc railyard in Montreal on Feb. 16, 2015. Canadian Teamsters and CP Rail blamed each other for a work stoppage Sunday, March 20, 2022 that brought trains to a halt across Canada and interrupted commerce saw trains come to halt across Canada. (Ryan Remiorz/The Canadian Press via AP)

DETROIT (AP) — Canadian Teamsters and CP Rail blamed each other for a work stoppage Sunday that brought trains to a halt across Canada and interrupted fertilizer and other shipments to and from the U.S.

More than 3,000 Canadian Pacific Rail conductors, engineers, train and yard workers represented by the Teamsters Canada Rail Conference are off the job after both sides couldn’t reach a deal by a midnight deadline.

Both sides say they are still talking with federal mediators.

Canadian Pacific covers much of the U.S. Midwest and is a large shipper of potash and fertilizer for agriculture. It also carries grain from the U.S. to its northern neighbor for domestic use and exports. The railroad serves the Dakotas, Minnesota, Iowa, Illinois, Wisconsin, Missouri and other states, according to a map on its investor website. CP also operates in New England and upstate New York, spokesman Patrick Waldron said.

CP says it’s the leading carrier of potash, a plant nutrient used in the production of multiple crops. The company says in investor documents that it carries 70% of the potash produced in North America, all from mines in Saskatchewan.

The railroad says it also carries fertilizers, including phosphate, urea, ammonium sulfate, ammonium nitrate and anhydrous ammonia. About half its fertilizer shipments originate from processing plants in Alberta.

CP got 29% of its 2020 freight revenue from cross-border shipments between the U.S. and Canada, its investor website said.

A lengthy interruption of fertilizer shipments could hurt U.S. farmers, who are nearing the spring planting season. The work stoppage could also exacerbate existing supply chain bottlenecks in the U.S. and Canada that stem from the COVID-19 pandemic.

U.S. trains were not affected by the work stoppage, but the railroad cannot make shipments between the two nations, Waldron said.

On Saturday, the Teamsters said in a statement that the company had locked the workers out, but later issued another statement saying the workers were also on strike.

The original statement posted to the Teamsters Canada Rail Conference website late Saturday said the union wanted to continue bargaining but the company “chose to put the Canadian supply chain and tens of thousands of jobs at risk.″

“As Canadians grapple with a never-ending pandemic, exploding commodity prices and the war in Ukraine, the rail carrier is adding an unnecessary layer of insecurity, especially for those who depend on the rail network,″ the statement said.

CP Rail, Canada’s second-largest railroad operator, said it was the company that wanted to keep talking, and the union that pulled its employees off the job.

CP President Keith Creel said in a news release the union “failed to respond″ to a new offer presented by mediators before the midnight deadline.

“Instead, the TCRC opted to withdraw their services before the deadline for a strike or lockout could legally take place,″ he said. “The TCRC is well aware of the damage this reckless action will cause to the Canadian supply chain.″

The Canadian and U.S. supply chains also were hit by trucker convoy protests blocking border crossings in February, and now are dealing with the effects, particularly on global fuel supplies, of the Russian invasion in Ukraine and sanctions imposed by the U.S. and its allies.

All the disruptions pushed inflation to its highest level since the early 1980s, with essentials such as food and fuel facing some of the sharpest price hikes.

CP and the union have been negotiating since September, with wages and pensions a sticking point. A clause on where employees take their federally mandated break periods is also an issue.

CP Rail says this is the fifth work stoppage since 1993.