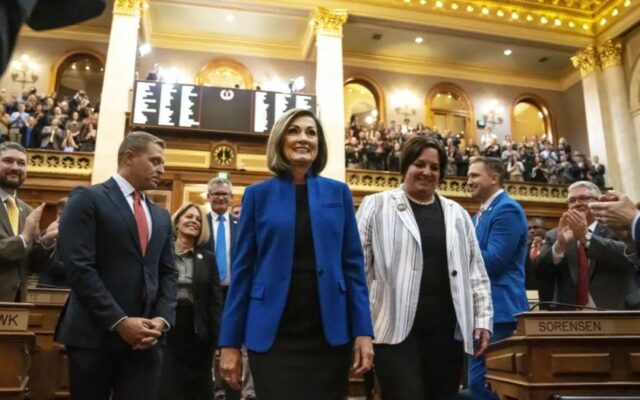 Gov. Kim Reynolds is escorted into the Iowa House of Representatives, on Tuesday, Jan. 10, 2023, to give the annual Condition of the State address, at the Iowa State Capitol, in Des Moines. (Kelsey Kremer/The Des Moines Register via AP)

(Radio Iowa) Governor Kim Reynolds is proposing state-funded savings accounts for parents who send their children to private school. Reynolds outlined the plan during the annual “Condition of the State” address at the statehouse.

“Our first priority in this legislative session and what I will be focusing on over the next four years is making sure that every child is provided with a quality education that fits their needs,” Reynolds said. The governor’s plan would create Education Savings Accounts. In the next school year, about 76-hundred dollars in state money would be deposited in each account — for low income parents enrolling a child in a private school. In the third year, ALL Iowa parents would be eligible for state money to cover private school tuition and related expenses.

“Every child is an individual who deserves an education tailored to their unique needs,” Reynolds said, “and parents are in the best position to identify the right environment.” This is the third year Reynolds has asked the Republican-led legislature to pass a so-called “school choice” plan and this year’s bill is the most expansive. Reynolds campaigned against some fellow Republicans in the Iowa House who opposed her previous plans. This new proposal is expected to send nearly 107 million dollars to low income Iowa parents who enroll their child in a private school for the next school year.

“Every parent should have a choice of where to send their child and that should not be limited to families that can afford it,” Reynolds said. The governor’s staff did not have state spending estimates for future years, when all parents would be eligible for state funds to cover private school expenses for a child. Senate Democratic Leader Zach Wahls says the governor’s plan, in year three, will give taxpayer dollars to wealthy Iowans who can already afford to send their kids to private school.

“So school choice, parental choice, is a misnomer,” Konfrst says. “…This is the latest scheme to hurt public education.” A newly-created, five-member House committee will review the governor’s school choice plan at a meeting early this (Wednesday) afternoon. Jack Whitver, the Republican leader in the state SENATE, suggests the governor’s bill could move quickly through the legislative process.

“We passed our first ‘school choice’ bill three or four years ago, so it’s been a conversation that’s happened over five years,” Whitver says. “But certainly over the last month we’ve continued to talk with (the governor), talk with the House, find out what they’re comfortable with, what we’re comfortable with and, hopefully, we can find agreement here in the next couple of weeks.” Reynolds also used last (Tuesday) night’s speech to reveal a state government reorganization plan. Reynolds hired a private consulting firm to help develop the outline, which would shrink the number of state agencies from 37 to 16.

“Aligning state government with the only reason it exists — serving Iowans,” Reynolds said. The governor’s aides say there will be no employee layoffs and more than 215 million dollars would be saved over the next four years under the reorganization plan. Reynolds also called on legislators to provide one-and-a-half MILLION dollars in state funding to groups that would offer parental counseling to men and teenage boys in at-risk households. This would be in addition to continued state funding for groups that provide pregnancy tests and other resources for expectant mothers.

“It sends a powerful message that a pro-life state is one that surrounds every person involved in an unplanned pregnancy with protection, love and support,” Reynolds said. Reynolds has not proposed new state abortion restrictions. The governor and Republican lawmakers say they’re waiting for an Iowa Supreme Court ruling on a six-week abortion ban that’s been blocked from taking effect.