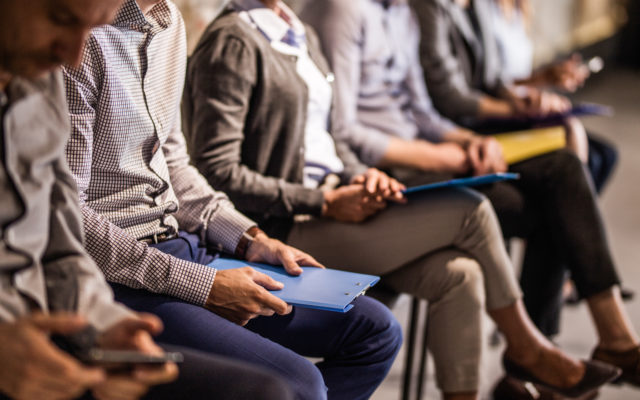 DES MOINES, IA (Radio Iowa) Republicans in the Iowa House and Senate have voted to reduce the maximum number of weeks Iowans may receive unemployment benefits by 10 weeks — from about half a year today down to 16 weeks. Senate Republicans favor an additional step — a one-week delay in delivery of the first unemployment check for a laid off worker. Senator Jason Schultz, a Republican from Schleswig, says Iowa would join at least 39 other states that have a one-week waiting period for unemployment benefits.

“It is also the opportunity when you make sure that everybody who is applying is eligible, that benefits have been paid out on that person and most importantly, probably, is that the level of fraud may be kept down,” Schultz says. Schultz says Senate Republicans are going to stand firm and insist that this be part of the final bill.

“There’s a mindset that takes place,” Schultz says. “…They are told: ‘Your benefits start in a week’…They immediately go look for something and they better their lives.” Governor Kim Reynolds has said these two moves will address Iowa’s workforce shortage by getting unemployed Iowans back to work more quickly. Representative Michael Bousselot of Ankeny is the Republican who led House debate of their plan to cut the number of weeks of unemployment benefits.

“Getting back to work is more important than ever,” Bousselot said. “…It’s important for Iowa families, but it’s most important for hardworking Iowans, for hardworking Iowans who I’ve heard from, who we’ve all heard from, who say that they own a business and they can’t fill the jobs that they need.” Bousselot says cutting jobless benefits to a maximum of 16 weeks ensures the stability of Iowa’s Unemployment Trust Fund for workers, like a waitress he met in Ankeny.

“She says: ‘I keep working and working and working to get ahead…I don’t understand why people are getting paid not to work,'” Bousselot said. “…We need to make the system that we’re talking about solvent for her.” Representative Chris Hall, a Democrat from Sioux City, says the state needs to attract more residents rather than come up with more punitive policies.

“Is the solvency of the Unemployment Trust Fund at risk? No,” Hall says. “And nobody’s buying the governor’s rational that garbage policy like this will have a positive economic impact.” House Democratic Leader Jennifer Konfrst of Windsor Heights says the plan punishes people who’ve been fired through no fault of their own.

“This is short sighted,” Konfrst said. “This is mean and this is wrong.” Democrats say the state should be boosting investments in child care and affordable housing to address the workforce crisis. Representative Timi Brown-Powers, a Democrat from Waterloo, says there’s a workforce shortage here because Iowa is a low-wage state.

“We don’t respect our workers. We have shown that time and time again,” Brown-Powers says. “In fact, this particular bill is a slap in the face of hardworking Iowans.” Senator Tony Bisignano, a Democrat from Des Moines, says these moves aren’t Iowa Nice and he got into a brief shouting match with Republicans in the Senate last (Wednesday) night.

“I don’t know how we get any lower than this,” Bisignano. “…The governor of this state chooses this as our direction?…This is your party’s agenda at its worst.” Last fall Governor Reynolds announced she intended to refocus the state agency that manages unemployment benefits on “rapid re-employment.” Bousselot — who used to be the governor’s budget director — emphasizes that, too.

“It’s about key jobs that are open,” Bousselot says. During her Condition of the State address in January, Reynolds said unemployment benefits had become a hammock for some and contributes to Iowa’s labor shortage.