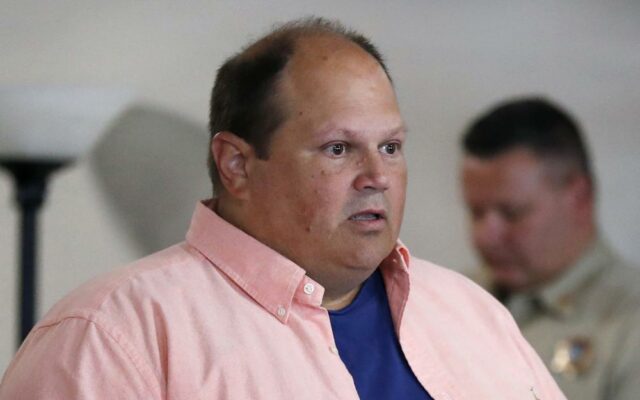 FILE - Former lottery computer programmer Eddie Tipton speaks during his sentencing hearing, Tuesday, Aug. 22, 2017, at the Polk County Courthouse in Des Moines, Iowa. Tipton, convicted in a scheme to rig computers to win jackpots for himself, friends and family, has been paroled after serving more than five years in an Iowa prison. Tipton, 59, was released from prison Friday, July 15, 2022, according to online prisoner records. (AP Photo/Charlie Neibergall File)

DES MOINES, Iowa (AP) — A former lottery computer technician convicted in a scheme to rig computers to win jackpots for himself, friends and family has been paroled after serving more than five years in an Iowa prison.

Eddie Tipton, 59, was released from prison Friday, according to online prisoner records. Axios Des Moines first reported that Tipton had been freed from the state prison in Clarinda.

Tipton pleaded guilty to ongoing criminal conduct in 2017 and was ordered to pay restitution of $2.2 million to Colorado, Wisconsin, Kansas and Oklahoma. He shared some of the restitution obligation with his brother in Texas, who collected some of the winnings and served a 75-day jail sentence.

Tipton worked at an Urbandale, Iowa, organization that provided random number drawing computers to several lottery states. At his sentencing hearing, Tipton told the judge he “wrote software that included code that allowed me to understand or technically predict winning numbers, and I gave those numbers to other individuals who then won the lottery and shared the winnings with me.”

It’s not clear what happened to the money Tipton and his associates won between 2005 and 2011. Out of the seven known winning tickets that netted more than $2.2 million, Eddie Tipton claimed to have ended up with only $351,000.

Tipton owes no restitution in Iowa because Iowa Lottery officials never paid him for the Hot Lotto ticket he attempted to redeem in December 2010 after suspecting misconduct.

Tipton filed a postconviction appeal later assigned by the court as a civil lawsuit claiming he was placed under duress to plead guilty. The lawsuit also claims Iowa officials had no authority to charge him for restitution in other states. Court records show the lawsuit is set for trial next month.

Tipton was initially granted parole on in January because of good behavior, but the board reversed its decision and rescinded his parole in March after he got into trouble for a physical altercation with another inmate in the prison’s gym.