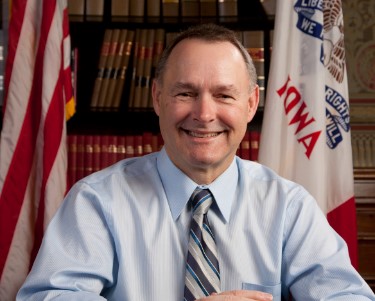 DES MOINES, IA (Radio Iowa) State Treasurer Mike Fitzgerald is again calling for creation of a state-managed investment program for Iowans who don’t have a pension or retirement plan through their employer.

“If you’re a waitress or you work at the lumber yard or a small business — any place, they don’t offer retirement plans,” Fitzgerald says. Fitzgerald first proposed a “Retirement Savings Iowa” program in 2016, to be managed by the State Treasurer’s office.

“This is a plan where you could put in 3% of your salary, send it into the state treasurer’s office. The employer — it doesn’t cost them any money because by federal law they can’t put any money into it, but it allows these folks to start saving,” Fitzgerald says. “As Warren Buffet says, that’s the magic to getting rich — get in the habit of saving.” Fitzgerald’s office has managed the College Savings Iowa program since in 1998. It currently has seven-and-a-half billion dollars in assets for 280-thousand accounts set up by parents and grandparents to cover college expenses for the next generation. Fitzgerald says it makes sense to set up a similar program, so Iowans can set aside money for retirement without paying taxes on it.

“Even if they’re only putting away $20 every two weeks, but after a few years, some of these young people will have something and something to build on,” Fitzgerald says, “and with half of the people in Iowa approaching retirement age with no pension or retirement benefits, I think it’s a serious problem.” Fitzgerald made his comments Thursday afternoon at the Des Moines Register’s Political Soapbox at the Iowa State Fair. Fitzgerald, a Democrat, is the nation’s longest-serving state treasurer. Roby Smith, a state senator from Davenport, is the Republican challenging Fitzgerald’s bid for an 11th term.