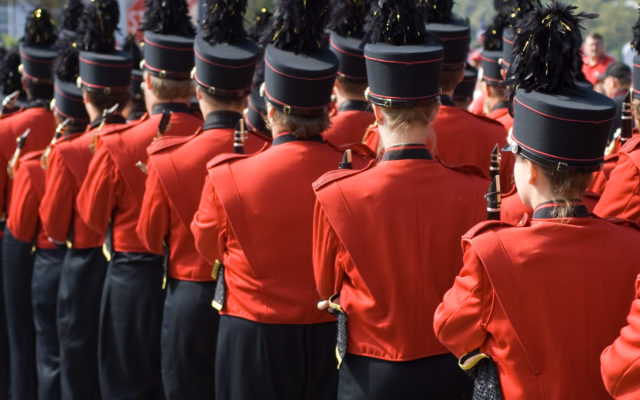 US College marching band in formation with red uniforms and black pants and hats, prior to football game.

On October 16, Trenton will be host to the Missouri Days Marching Festival.

The Marching Festival Committee has called it the Bigger and Better than Ever Festival.

The morning begins with a one-mile parade starting at the newly renovated campus of North Central Missouri College. The parade then passes through the heart of historic downtown before ending just two blocks from the main festival site and Trenton High School campus.

A field show competition follows the morning parade at C.F. Russell Stadium where bands will be judged on music, marching, and maneuvering, general effect and field auxiliary. An Indoor Drumline and Auxiliary competition will take place in the afternoon on the campus of Trenton High School.

The festival will wrap up with an awards ceremony under the lights at C.F. Russell Stadium with awards given to the top three of each class in their respective event.

Marching bands can register at on the official website.