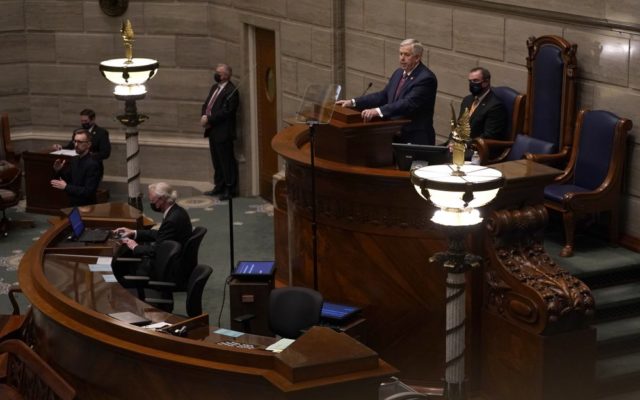 Missouri Gov. Mike Parson delivers the State of the State address Wednesday, Jan. 27, 2021, in Jefferson City, Mo. The speech is traditionally given in the House chamber but was moved to the smaller Senate chamber at the last minute due to concerns about the coronavirus. (AP Photo/Jeff Roberson)

JEFFERSON CITY, Mo. (AP) — The fate of a wide-ranging law enforcement reform bill was in question Tuesday after Gov. Mike Parson threatened to veto it over a provision that gives lawmakers the power to issue subpoenas requiring people to testify before legislative committees.

A person who fails to appear before a committee or to produce required documents could be prosecuted.

Other provisions in the bill would ban police from using chokeholds, allow weapons in places of worship and crack down on protesters who block roadways.

A joint committee was reviewing the final draft of the bill Tuesday, when Sen. Tony Luetkemeyer, a Parkville Republican, said he removed the subpoena power provision because of the governor’s objections.

But House members said they would not support the proposal if the subpoena provision was removed, prompting Luetkemeyer to postpone further consideration of the overall bill until Wednesday.

Parson and House members have clashed frequently over the chamber’s use of special oversight committees to investigate numerous issues.

House members have said the subpoena provision is necessary because the Parson administration has not complied with lawmakers’ requests for information.