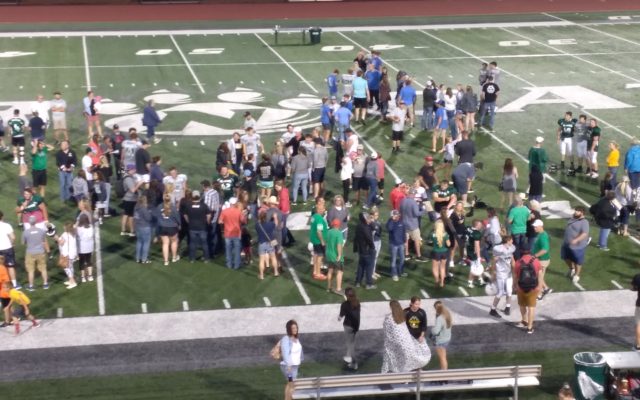 Albany’s Kaedon Hutchinson provided the Silver 8-man All Star Football Team with the go-ahead touchdown and then preserved the Silver’s victory with an interception in the last 2 and 1/2 minutes of the 13th annual Missouri 8-man Football Coaches Association All-Star football game held Saturday night at Bearcat Stadium Maryville. The Silver All-Star defeated the Green All-Stars 38-32.

In what was a entertaining football game, the Silver All-Stars answered a Green All-Star touchdown scored with a little over 6 minutes remaining and gave the Green All Stars a 32-30 lead. Silver All Star quarterback Wes Hughes, who quarterbacked Southwest Livingston to the 8-man title in November, ran for 3 touchdowns on the night and hooked up with Hutchinson on a deep ball with 2:36 remaining in the 4th quarter that gave the Silver All-Stars a 38-32 after the conversion.

The Green All-Stars threatened right away after a couple chunk plays allowed them to get field position and took little time off the clock. Green All-Star quarterback Drew Quinlin of South Holt/Nodaway Holt ran for two touchdowns and threw for another two on the night, but was short on a deep middle throw in the final minute of the game. Hutchinson’s interception was the second interception of the night for the Silver defense of Quinlin.

The Green All-Stars had two 1-play touchdown drives. Dylan Sutton of Archie ran the opening play of the game for a 65-yard sweep and score. He was later injured in the first half and did not return. Tryce Floyd of Albany replaced Sutton on his wing position and caught a 46-yard touchdown for the Green’s 3rd score of the game with 3:18 left in the first half. Floyd reversed roles with Quinlin to set up the Green’s final touchdown pass on a reverse throw back that Quinlin caught just before it hit the turf.

At halftime of the game, the Missouri 8-Man Football Coaches Association recognized the 2020 and 2021 coach and player inductees into their Hall of Fame. The coaches were Vernon Pike of DeKalb (2020 inductee) and Jim Schultz of North Andrew. The players were Ryan Hackett of West Nodaway (2020 inductee) and Macon Allan of King City